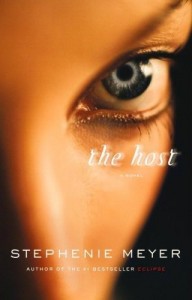 Bestselling author Stephanie Meyer of the â€œTwilightâ€ saga has dabbled in the adult science fiction genre with â€œThe Host.â€ If you did not buy into vampire mania, then do not fret â€“ thereâ€™s not a bloodsucker to be found in this one. Hope you like alien/host takeovers, though.

Unlike the teen saga, â€œThe Hostâ€ provides the reader with a bit more substance. There is no annoying teen obsessed with her supernatural love interest, hell bent on being â€œone of them.â€ This is a psychological thriller that will keep you guessing right up to the end.

In the future, worm-like aliens have silently landed on Earth, kidnapping and killing people in order to take over their lives and bodies. This new species thrives on host bodies in an effort to take care of the host planet better than the previous inhabitants do. These aliens are not violent in the sense that they harm each other. The remaining underground human community can notice these aliens due to their ultra-kind nature, darkened eyes and the scars left from insertion on their necks.

The narrative is unlike what many readers have previously encountered. Technically, the protagonist is made up of two entities â€“ a human host and an alien species. Yet they wind up entangled in each otherâ€™s own affairs, and not by choice. When Melanie, our main character, becomes implanted, the aliens did not anticipate a fight. The alien that takes over her body fights for control of her mind and emotions, only to learn that they need to wind up on the same team and must work together in an effort to ensure survival and save Melanieâ€™s missing brother and her boyfriend.

The reader will begin to feel compassion toward the alien living inside of Melanieâ€™s mind. This is something many authors only wish to achieve â€“ to seemingly give a neutral story of both sides and have the reader struggle with what is truly right and wrong. Meyerâ€™s expectantly taps into your own psyche with this novel and hooks you until the very end in your search for answers.

Meyer does not disappoint. â€œThe Hostâ€ proves that she has the ability to move beyond adolescent literature and give the people what they truly want â€“ a good read that isnâ€™t soaked in a teen drama queenâ€™s infatuations. Meyerâ€™s only major issue in this novel is her lengthy descriptions (there are 10 unnecessary pages worth of the protagonistâ€™s journey to a restroom). No author is perfect, but at least Meyerâ€™s adult fiction comes a lot closer than her previous endeavors.