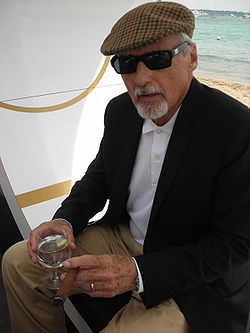 Dennis Hopper was one of the most wildest characters to grace the silver screen, and just maybe it was that wild side that helped sustain a career that has lasted since the mid-fifties until the present.Â  Sadly, the actor passed away on May 29, 2010 at the age of 74 in Venice Beach, California, due to prostate cancer.

Hopper was born on May 17, 1936 in Dodge City, Kansas, and it wasn’t long after that he began acting, with small roles on television. He appeared in some of the most respected television shows of the time, which included, “The Twilight Zone,” “Gunsmoke,” “Bonanza,” “Surfside 6,” “Combat,” “Wagon Train” and “Petticoat Junction.”

He made the gradual leap to the big screen with small roles in huge films, sharing the screen with one legendary actor, James Dean. Hopper played Goon in the classic, “Rebel Without a Cause,” and began a brief friendship with Dean. The two actors appeared together again one more time in the epic Elizabeth Taylor and Rock Hudson picture, “Giant,” which was filmed shortly before Dean’s untimely death.

His career was filled with roles that were good, bad and ugly, and he set that vibe early on. He is one of the few actors to cement a legitimate acting career with roles in both exploitation and mainstream cinema. A perfect example of this would be in 1967, when he had a small role in the Paul Newman classic, “Cool Hand Luke,” and a part in the Peter Fonda/Roger Corman acid trip movie, simply entitled, “The Trip.” In it, Hopper played the man who sold Fonda and Bruce Dern the acid, early on. The rest of the picture centered on Fonda dropping acid and experiencing one hell of a trip.

“The Trip,” which was penned by Jack Nicholson, lead to several connections for the young actor. For starters it began a friendship with Fonda, and the two discussed writing a film that explored the youth of the late sixties. He also did an uncredited role in another Nicholson penned film, “The Monkees: Head,” and he played, “long-haired guy at film shoot in restaurant.”

The late sixties, were a turbulent, but successful time for the actor, he still was only a supporting player in the game of Hollywood. It wasn’t until 1969 that “Easy Rider” hit the big screen, which is considered by many to have fully captured the essence of that time. The idea that Fonda and Hopper started on “The Trip,” became fully realized. Hopper, without any experience, was granted the chance to direct the picture, which has gone on to become one of the most overrated films on the American Film Institute’s Top 100 films.

The studio was proud of the success of “Easy Rider” and allowed him the chance to direct an even bigger mess entitled, “The Last Movie.” The seventies were a wild time for the actor and was fueled by drugs and alcohol. He even once stated that at parties, people would recite lines from his movies, and he would have no clue what they were saying. However, similar to the sixties, he got one great role at the end of the decade, which was in Francis Ford Coppola’s, “Apocalypse Now.”

His hard living lifestyle caught up with him in 1983, where in a catatonic state, the actor was discovered walking around the woods naked in Mexico. This began the hardest part of the actor’s career, becoming sober, and solidifying his mark in Hollywood.

He teamed up with Coppola again for 1983’s “Rumble Fish,” where he played the alcoholic father of Mickey Rourke and Matt Dillon. A few years later, he teamed up with the legendary Robert Altman for the bizarre, ” O.C. and Stiggs.”

It is hard to believe that sobriety played apart in his acceptance of the role of Lieutenant ‘Lefty’ Enright, in “The Texas Chainsaw Massacre Part 2.” A comedic follow-up to the seventies, drive-in classic become one of the most strange films ever made. Hopper’s character is seeking revenge and he played it with a straight face, which allowed for some unintentional humor. A great scene and classic Hopper is when he goes to buy some chain saws for a battle he is about to have. Hard to tell if the humor in that scene is intentional but hats off to Hopper for never breaking character.

Despite, “The Texas Chainsaw Massacre Part 2,” 1986 was a great year for Hopper. It started with a small role in the Keanu Reeves’ teen-drama, “River’s Edge,” where he played a lunatic that lives with the regret of murdering someone he loved dearly. However, he surprised everyone with his off-the-wall performance as Frank Booth in the David Lynch classic, “Blue Velvet.” The character of Booth is a sadistic villain with no redeeming qualities, and is truly frightening. It is a testament to his career that he could play a character such as this, and make it believable.

But his greatest thrill of 1986, was probably his Oscar nomination for Best Supporting Actor in “Hoosiers.” The picture centered around a team of underdogs, making it to the championship, and is full of wonderful performances from the entire cast. Hopper seemed to be channeling his years of experience as an alcoholic, to play a drunken father of one of the players. And this role proved that even, while working in cult movies, he always comes back into the mainstream spotlight.

His sobriety in the eighties, even made him a better director, with “Colors.” The picture featured Sean Penn and Robert Duvall as two cops dealing with the ever-growing problem of gangs taking over the area. He also directed the underrated, erotically charged thriller, starring Don Johnson, “The Hot Spot.” The film is based on a modern updating of the classic film-noir and packs a lot of suspense.

The nineties brought along smaller supporting roles in some direct-to-video pictures, but as always he made some unique surprises. In “True Romance” he shares a small scene with Christopher Walken, that is an example of great acting. The two actors build an intense scene, where the audience is fully aware what will happen, and proves that two good actors with exceptional dialogue can make any scene work. Hopper, while staring death in the face makes an inappropriate joke, that most Sicilians hate hearing.

Hopper’s last great movie was “Speed,” which is a high-octane thriller, where he got to expose his sadistic side once again. Shortly after that, he starred in the major flop, “Waterworld.” The rest of his career was filled with small, (“EDtv”) or forgettable roles, (“Ticker”) in pictures that audiences stayed away from. But with a career as long as his, one could understand the need to slow down.

Interestingly enough, no one ever knew what to expect from Hopper, and last month, while suffering from prostate cancer, he filed for a divorce from his fifth wife, Victoria Duffy, citing irreconcilable differences.

Hopper is survived by four children, and his legacy as one of the coolest, wildest rebels in Hollywood. Constantly, striving to adjust to the times and make movies for the people, his persona and spirit is something we can all admire.