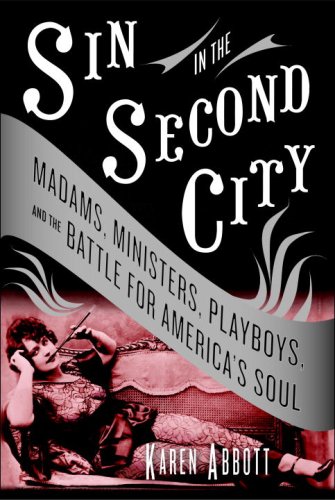 Karen Abbotâ€™s “Sin in the Second City” chronicles the rise and fall of Chicagoâ€™s infamous Everleigh Club, a brothel which catered to the crÃ¨me de la crÃ¨me of society from 1900 to 1911. In addition, it also tells the illustrious story of the clubs madams, sisters Ada and Minna Everleigh, whom went from a life privilege to owning the classiest whorehouse in America.

A combination of meticulous research and enthralling storytelling, Abbotâ€™s book is a vivid portrait of life in the notorious Levee District (Chicagoâ€™s red light district). Each chapter is rife with elaborate details; from gaudy boudoirs with names like The Room of 1,000 Mirrors, to recounting how Prussiaâ€™s Prince Henry drank champagne from an escortâ€™s shoe, to a cast of characters with names like â€œHinky Dinkâ€ Kenna and Suzy Poon Tang.

Whereas the majority of pimps and madams operating in Levee abused and discarded girls as soon as they were past their prime, for Mina and Ada were more about opportunity than exploitation .The girls in their employment dined on gourmet food, wore couture gowns, received medical care, and even tutored in the literature of Balzac.

Their reputation for treating their â€œbutterfliesâ€ as equals prompted women from all over the country to the steps Everleigh Club seeking employment; there was even a waiting list.

The book is not merely tawdry historical, as Abbot provides superb historical context of flesh peddling in the age of moral reform. As business was booming, the public was in panic over â€œwhite slaveryâ€- as tawdry headlines of innocent young women being deceptively lured by men (particularly immigrants) whom would rob them of their innocence and sell them to whorehouses to work the streets of urban slums. This hysteria prompted the creation of what is now called the Federal Bureau of Investigation.

On top of that the, the Everleighâ€™s has a vast array of enemies, from other brothel owners who wanted to get rid of the competition, to religious crusaders zealously intent on the ridding Chicago of vice. Ironically enough, these two opposing forces had the same objective: shutting down the Everleigh Club once and for all. What followed was a hefty trail of corruption, murder, and mayhem with Ada and Minna barely surviving by the skin of their teeth.

The only downside to Abbotâ€™s book is her tendency to use purple prose in order to embellish the story. This is completely unnecessary, as the rich material and multifaceted characters are more than enough to captivate readers. Indeed, it has the opposite effect and hinders the progress of the story at certain points.

Sin in the Second City is as entertaining as it is relevant because the themes of sex, lies, morality, and corruption are still as ubiquitous today as they were a century ago (Elliot Spitzer anyone?). Whatever one may think of prostitution, it has been part of society since time immemorial and Abottâ€™s book exposes another chapter of American history where sex and politics converge in the streets of the â€œWindy Cityâ€.