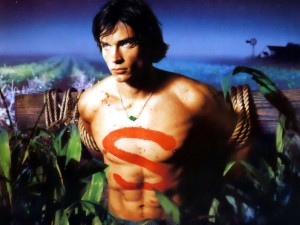 The Watchtower, Justice Society of America, Dr. Fate and the night the lights went out in the fortress of solitude â€“ in the final season of Smallville destiny plays a monumental role in the life of Clark Kent â€“ so much so that theyâ€™ve brought Pa Kent to help him navigate between his life â€œand the abyss.â€

Always looming are the specters of his Kryptonian father Jor-El and Lex Luthor. Has he been in limbo all this time? And where does Chloe and Lois fit into this? Then thereâ€™s the man who says â€œweâ€™re coming for you.â€ But wait it gets worse â€“ thereâ€™s an evil greater than Zod out there.

If anything this looks to be the best season of the series as Lois is bringing the pieces together. Meanwhile Chloe takes on the mantle of Dr. Fate risking her sanity in the process. When the glowing helmut calls you a â€œfoolish girl,â€ then itâ€™s probably not a good idea to put it on. Whatâ€™s worse Ollie is being tortured by a sadist â€“ a detailed sadist who wants answers.

Moreover, Mercy is brought back. Her scenes are a combination of Alien 4, The Omen and Rosemaryâ€™s Baby. It makes for one of those run-for-your-life moments that will leave you looking forward to next weekâ€™s installment.

This episode doesnâ€™t allow you to breathe (seeing Clark in his hubris is one of the mistakes of his enemies. After all this is the worldâ€™s hero, its strength.), but it does raise a multitude of questions. Will they be answered in the coming episodes to come? Who knows â€“ but donâ€™t blink, not for one moment. You might just miss something pivotal.