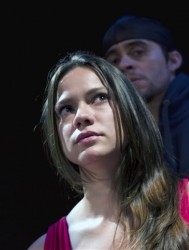 A burglar slips on stage and puts a knife to the young girlâ€™s throat. She tells him not to turn on the lights.

Playwright JosÃ© Luis Ramos Escobar was present for the second night of Theatre IATIâ€™s â€œThe Smell of Popcorn,â€ starring Luciana Faulhaber as Fabiola, the student-actress and Javier E. Gomez as Georgie, the deplorable yet sympathetic thief.

Fabiola is a student rehearsing lines from Othello, in which she plays Desdemona. Georgie comes in literally as a thief in the night, holds a knife to her throat and the two enter an unlikely role-play, delving into one anotherâ€™s perspectives until their lips press against each other. Then Georgie runs away like a frightened child. One of the more interesting tidbits is that the play is based on a real event.

While â€œThe Smell of Popcornâ€ is primarily about violence against women, what makes the play substantial is the actorsâ€™ subtle portrayal of a weak man abusing a strong woman. Fabiola is indeed tougher than Georgie. Faulhaber plays her as an independent yet emotional being. Her nuanced performance shines through in a few key moments: in the unsure steps she takes in bright red heels that Georgie forces her to model, and in the quiet, teasing laughs that followed Georgieâ€™s personal revelations.

Director Jorge B. Merced took the play in a different direction from the original, treating the parts as actors in themselves, as well as characters. What results is a serious yet very funny black comedy about the types of violence between men and women.

Gomez gives a convincing turn as a vulnerable thief, victimized by society. His haunted expressions are unnerving, especially when he confesses to Fabiola. He mocks her assumption that they are only separated by degrees, only to realize later that what they share is isolation.

Georgie invites disgust each time he lays a hand on Fabiola: tying her to the bed and lifting up her shirt. Yet by the end of the play itâ€™s quite obvious that heâ€™s as helpless as she is, albeit in a different way.

The productionâ€™s faults have to do with the genre. Black comedies are difficult to pull off, going from gasps to smirks in a matter of seconds. Faulhaber and Gomez carry it well but the play feels unsure of itself at times.

Part of that uncertainty has much to do with the depth of the subject matter: few black comedies delve as deeply into the painful emotions associated with rape and poverty. While some of this is built into the script, things get too loose and the play becomes undermined. A more prominent stage presence may have tied things together in a more fluid way.

â€œWhat exactly does â€˜the smell of popcornâ€™ refer to?â€ asked an audience member in the after show Q and A. Merced asked those in attendance for their opinions. Ramos Escobar said the real-life Fabiola had said her room actually smelled of popcorn after her attacker left. He interpreted â€œthe smell of popcornâ€ as evidence of an â€œinvasion.â€

Directed by Jorge B. Merced