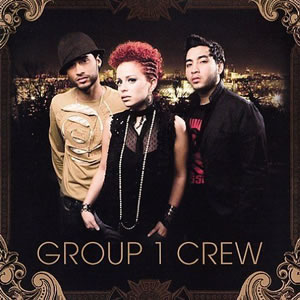 Formed in Orlando, Florida, Group 1 Crew is a Christian hip-hop band that is signed to both Fervent and Warner Bros. Records. Not only do they offer hip-hop to the music scene, but their tracks also contain Christian contemporary, Pop and Urban/R&B styles.

All three members, Manwell Reyes, Blanca Reyes Callahan and Pablo Villatoro contribute vocals and rapping to the tunes that they create.

Assembled in 2006, since then, this crew has been unstoppable.

Their music has been featured in the popular television show, One Tree Hill and at the 39th annual GMA Dove Awards in 2008, they won the Dove Award for “Rap/Hip Hop Album of the Year.”

Being the first track off of “Outta Space Love,” ‘Live It Up’ definitely sets off a dynamic flow for what the CD’s overall outcome might be.

The lyrics are somewhat corny, but very cheerful at the same time; constantly referring to common and popular things, such as Facebook, partying and thanking God it’s Friday.

Energetic beats follow the highly chipper and spirited voices of Reyes, Callahan and Villatoro. They easily demonstrate their gratefulness towards life and that they believe everyday should be a celebration.

Though Group 1 Crew’s voices are appealing, they should not have used auto-tune to adjust their vocals. The more natural, the better.

Without a doubt, it’s the type of song that can enlighten someone’s mood and give that person a sense of carelessness towards any issue, but it certainly isn’t unique in any way.

‘Live It Up’ can use some improvement, simply by staying away from altering machinery and the over-exaggerated feel of trying to incorporate both Pop and Hip-hop.