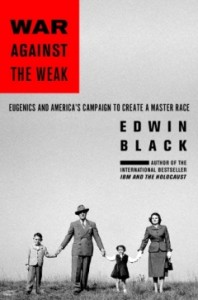 What would it take to engineer the perfect human being? For many Americans, this sounds like a cheesy tag-line in a sci-fi movie. Few people know that during the 20th century, an attempt was made to engineer a utopian society, or that this attempt involved some of the most appalling ethical violations in U.S. history.

This attempt is the eugenics movement, and its horrors have been vividly documented by Edwin Black in his book, “War Against the Weak: Eugenics and America’s Campaign to Create a Master Human Race.” The book describes how a broad coalition of politicians, scientists, and intellectuals attempted to create a society free of violence, poverty and degeneracy, and, in doing so, contributed to one of history’s most horrific episodes: the Holocaust.

In this book, Black allows the reader to see an entire picture of the movement that led toÂ  anti-miscegenation laws (which prohibit marriage between races), immigration restrictions and a compulsory sterilization of more than 60,000 “defective” Americans. Ironically, over a third of these policies were instituted after World War II, after the Nuremberg trials deemed compulsory sterilization a crime against humanity.

While its thesis is simple, the sheer volume of information is both astonishing and galling. In the first of three parts, Black discusses the cultural, political and scientific landscape that allowed the pseudoscience of eugenics to thrive in the industrialized world It also describes the mass paranoia fixated on preserving racial superiority of the Anglo-Saxons at the expense of minorities, the poor and anyone else deemed “defective.”

The reader is also introduced to characters who advocated eugenics, some of whom are familiar — Presidents Theodore Roosevelt and Woodrow Wilson, acclaimed author H.G. Wells, to name a few — and some less well-known, including Charles Davenport, who pioneered eugenics research at Cold Spring Harbor, and Dr. Harry Haiselden, who advocated the passive euthanizing of newborns.

The second part demonstrates how parts of the racial policies of Nazi Germany were imported from the U.S., some literally taken word for word. The book also exposes the source of funding for eugenics studies, which came from the Carnegie Institution’s work on mathematical formulas that would identify “Jewishness,” and went to German institutions, which enabled the horrific experiments of Joseph Mengele.

The final portion of the book tackles the issues of bioethics in the modern age. In an era defined by designer babies, egg donors, cloning and a slew of other daunting issues, Black reminds the reader that the good intentions of some can have awful results on the most vulnerable individuals in society.

Black does a great service to the written word, not simply in uncovering a dark and often-forgotten chapter in American history, but also in preserving the stories of countless people who feel victim to a movement that sought to alleviate the social ills of its time, and instead inflicted enormous suffering and misery on a great number of people.