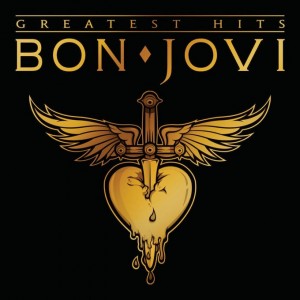 Itâ€™s 1986 and youâ€™re listening to this rocking band. They happen to have a great look and an even better sound. Theyâ€™re also from Jersey and have that special musical sensibility that comes with that town. No, theyâ€™re not the Boss, but they are part of a tradition of amazing talent that stems from that state. Since one of their biggest hits Livinâ€™ On a Prayer skyrocketed to the top of the charts in the late â€˜80s Bon Jovi has been ruling multiple musical charts and have compiled an amazing set of songs that will bring back memories and where you are sure to make new ones.

Still for the long-time fan of this group the hits are no surprises. â€œLivinâ€™ On a Prayer,â€ â€œYou Give Love a Bad Nameâ€ all the way to the recent â€œWho Says You Canâ€™t Go Homeâ€ (featuring Jennifer Nettles from Sugarland) are all here on this greatest hits album.

What is different is the re-mastered songs. They seem to breathe new life into the clearer-sounding, richer tracks. Jon Bon Joviâ€™s vocals are clear, the instruments are keener and have a stadium feel that you can still appreciate on your mp3 player. So if you converted these tracks from vinyl to CD you wonâ€™t be wasting your time downloading them again.

What is missing is what could make this okay greatest hits set of recordings a phenomenal compilation of this groupâ€™s body of work.

A missed opportunity to feature some never before released tracks of these songs or live versions would have made this album a canâ€™t miss for your musical collection. What happened to the live acoustic version of â€œWanted Dead or Alive?â€, solo recordings from the other band-members or perhaps a demo version of â€œRunawayâ€ â€“ something to give their veteran fans a reason to pick up these set of tracks.

Still itâ€™s hard to quibble with this album when you listen to one of the new songs â€œWhat Do You Got?â€ Jon Bon Jovi over the years has become a phenomenal songwriter. This track is timeless and fits into the Bon Jovi canon nicely. However, fans of the band might want to pass on â€œNo Apologies.â€ It sounds as if itâ€™s an anthem in training.

Overall Greatest Hits by Bon Jovi is a solid representation of their rock and roll sound. Still if you can hold out you may want the two-disc set, which will be released later in the year, to get all four new tracks.