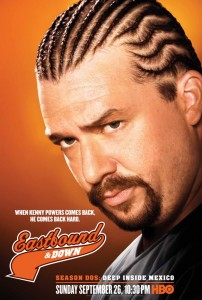 Kenny Powers has proven time and time again that he’s a self-destructive ego maniac, but this episode takes it to the next level.

After discovering Vida and Sebastian messing around in the recording studio, Kenny ends his Mexican baseball playing days by causing the type of trouble that John Rocker would scoff at. Through all of this, he finds a way of robbing Stevie at any shot of happiness by telling him he needs to stop seeing the Mexican woman he’s sleeping with.

Seeing Stevie find happiness is an interesting moment to say the very least. Even though we’ve seen him with a hooker over the course of the show, you were always made to think he had a crush, an incredibly obsessed one, on Kenny. Now it just seems like he’s an extremely loyal friend, who lacks any common sense. Where their friendship ultimately ends up, as far as Stevie’s relationship, is up in the air.

In spite of all of this, the best moment of this episode is when Kenny and Stevie find the “elusive” Mr. Sanchez, who turns out to not only be the Ã¼ber cool Don Johnson, but also Kenny’s father. With his baseball career over again, it’ll be interesting to see where this new angle sends Kenny and Stevie.

Although this episode was totally over the top and ridiculous, between the sex scenes and Kenny’s ouster from baseball, this show continues to keep throwing curve balls in fast ball counts, continuing to fuel its ever-growing legacy as wild and unpredictable.

Add Johnson into the mix and you have one of the best comedies on TV this fall season.