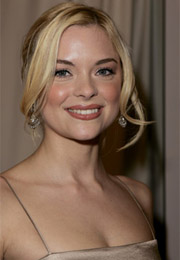 (New York, NY) â€“ The TromaDance Film Festival Committee is thrilled to announce that Jaime King, Darren Lynn Bousman, and Richard Saperstein will join the distinguished group of independent film icons who will speak at the TromaDance Press Conference at the 2010 American Film Market! The press conference is scheduled for November 4, 2010 at 3 pm in the Loews Santa Monica Beach Hotel Press Room!

Originally a fixture of the modeling world, King has made a very successful transition into acting. Beginning with parts in movies such as BLOW and PEARL HARBOR, King was quickly offered a lead role in the 2005 big screen adaptation of Frank Millerâ€™s SIN CITY. Most recently, she played Beth in Richard Saperstein and Darren Lynn Bousmanâ€™s re-make of Charles Kaufmanâ€™s Troma classic MOTHERâ€™S DAY!

Saperstein has executive produced such impressive films as SE7EN, JOHN Q, 1408 and HANCOCK. Bousman came to prominence writing and directing SAW II. He then took the helm of SAW III and SAW IV.

Now in its 12th year, the TromaDance Film Festival is a beacon for truly independent cinema. As the largest market for independent films, the American Film Market perfectly complements the ideals of TromaDance and has served as an excellent setting for the annual TromaDance Press Conference. Hosted by Lloyd Kaufman, President of Troma and Creator of THE TOXIC AVENGER, the TromaDance Press Conference at the AFM has been the perfect meeting ground for the contemporary independent minds of such individuals as Jenna Fischer, Fred â€œThe Hammerâ€ Williamson, James Gunn, Mark Neveldine, Brian Taylor, Penelope Spheeris, and, of course, The Toxic Avenger, to converge and discuss the state of the film industry and other important news.

Inspired by Trey Parker and founded in 1999 by Kaufman, TromaDance is the first film festival wholeheartedly devoted to filmmakers and fans. Unlike every other film festival, TromaDance does not charge filmmakers a fee to submit their films. Entrance to all screenings is free and open to the public. The organizers of TromaDance believe that films are meant to be seen, especially when it comes to new filmmakers.