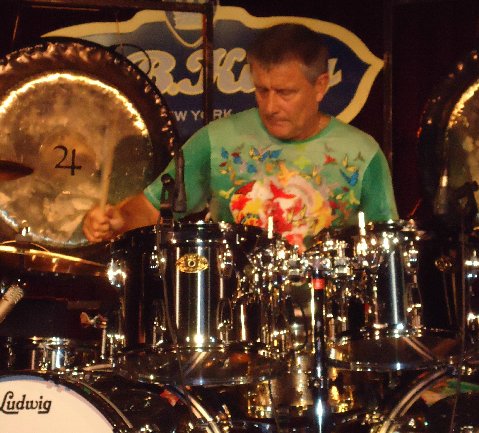 The world greatest living drummer, Carl Palmer, wowed a packed house at B.B. Kings on October 19th with his trio, treating the assembled throng to a show that included interpretations of Emerson, Lake and Palmer material, wonderful improvisatory sections and a private â€œdrum clinic.â€ The Carl Palmer Band which includes Palmer, along with Simon Fitzpatrick (bass) and Paul Bielatowicz (guitar), demonstrated their virtuosity as individual musicians and as part of a cohesive musical unit.

Palmer, who reunited with former band mates Keith Emerson and Greg Lake at the High Voltage Festival in London this past summer, has done double duty with Asia releasing â€œOmegaâ€ and touring with that outfit to rave reviews. The Carl Palmer Band, which played on this night, has just released â€œWorking Live â€“Volume 3â€ and featured some tracks from it.

Palmer, whose dynamic drumming was a cornerstone of Emerson, Lake and Palmerâ€™s sound, and one of the reasons they sold in excess of 40 million records, hit the stage wearing a vibrantly colored tee shirt and a smile. His Ludwig drum kit featured a double bass set up and two gongs behind the drum riser. Bielatowiczâ€™s black tee shirt read â€œLead guitaristâ€ and his axe of choice on this night was a Paul Reed Smith model. Fitzpatrick, playing a GB six string bass, said backstage after the show that he has been playing with Palmer for only three weeks while Bielatowicz has been with him for seven years.

Palmer, who is 60 years of age, has been renowned as a drummerâ€™s drummer for decades and proved it once more on this night that featured his work with ELP. The show began with â€œThe Barbarian,â€ and right from the start. Palmerâ€™s power and dexterity on the drums were evident. A 20 year old would be hard pressed to play at Palmerâ€™s frenetic pace and with his thunderous attack. Palmer exclaimed, â€œIs it loud enough?â€ and the crowd roared its approval.The second offering, Aaron Coplandâ€™s â€œHoedownâ€ from the American 20th century composerâ€™s â€œRodeo,â€ was dynamic and Bielatowiczâ€™s duplication of Emersonâ€™s keyboard work on ELPâ€™s interpretation of the piece was quite impressive. His use of finger-tapping and hammer-ons was intricate, yet sonically pleasing. Fitzpatrick, on six stringed bass, played chords and high register notes that complemented the trioâ€™s presentation.

â€œPeter Gunn,â€ Henry Manciniâ€™s detective show theme, took the show to another gear with Bielatowiczâ€™s guitar acrobatics, Palmerâ€™s yeoman work on the skins and Fitzpatrickâ€™s unique approach on the bass. Palmer would introduce some of the songs with brief anecdotes about the recording of the tracks and his halcyon days with Emerson, Lake and Palmer in the â€˜70â€™s. â€œBitches Crystalâ€ from Tarkus was given a wonderful treatment that stayed true to the original version, while adding a new exciting element to it.

Palmer, who poked fun at ELPâ€™s Love Beach album (a release that was pushed by the record company, to the bandâ€™s chagrin) played an underrated track off of that album, â€œCanarioâ€ featuring excellent musicianship from all three members of the band. The show shifted into high gear with Palmerâ€™s new take on an ELP classic, Tarkus. Video screens on both sides of the stage showed images of the Armadillo and tank-like creature that adorns the cover of the groundbreaking album along with other animation. All the players shone brightly on this rendition of that ELP classic.

At this stage in the show, Palmer left the stage for a while to allow his band mates to shine. First up was Bielatowicz who played a lilting, heartfelt rendition of the Great American Songbook classic, â€œSomewhere Over The Rainbow.â€ Displaying virtuosity and feel, this young guitar ace had the crowd in the palm of his hand. He then displayed his guitar abilities on â€œFlight of the Bumble Bee,â€ in which his fingers were a blur on the fret board. Bielaltowicz, whose hands â€œflewâ€ up and down the neck of his guitar, is a consummate musician who has wonderful dynamics in his playing. He can shred and solo with emotion.

Fitzpatrick took center stage with his six string GB bass and displayed his chops by playing a rousing version of Queenâ€™s â€œBohemian Rhapsody, featuring chording and incredible command of an instrument that was staggering. His unique take on this classic rock standard was a perfect contrast to the rest of the show.

Palmer took the stage asking the crowd to give his young compatriots a hand and proceeded to play the title track from the Trilogy album which usually features Greg Lakeâ€™s unmistakable vocals. Since this was an instrumental version, Bielatowiczâ€™s guitar voiced the melody line beautifully with wonderful tone and texture. Palmerâ€™s drumming was staggering to behold and instead of his energy level dropping as the show wore on, it rose to new heights. Watching this progressive rock icon play is akin to watching a bottle of fine wine age gracefully.

â€œPictures at an Exhibition,â€ composed in 1874 by Modest Mussorgsky, was the next offering on this night, a piece Palmer had covered it in 1971 with Emerson and Lake. His reworking of this opus with his trio was nothing short of brilliant. It had wonderful dynamics, incredible instrumentation and bombastic drums that gave the audience chills. As the performance of the piece progressed, the video screens showed images of the Russian Revolution, Tsar Nicholas and the landmark film â€œBattleship Potemkin.â€

The band left the stage to a raucous ovation and the die-hard Palmer fans yearned for more music. After a short period, the trio returned and tore into a frenetically-paced interpretation of Coplandâ€™s â€œFanfare for the Common Man,â€ an ELP staple. Images of Palmer as a child on a drum set and his embryonic days as a member of Emerson, Lake and Palmer filled the video screens and added a touching element to the nightâ€™s musical fare. Bielatowiczâ€™s work on the EBow, an infinite sustain device, added an eerie quality to his guitar solo. Palmerâ€™s spotlight drum solo was nothing short of amazing. His power, feel and ability to do play four different rhythms with four limbs have to be seen to be believed. He is the Buddy Rich (some say the greatest drummer ever)of his generation and his style alternates between rock, jazz ,fusion and any style of modern music you can think of.

The closing selection was “Carmina Burana,” which is featured on Palmerâ€™s Working Live 2.Itâ€™s haunting, evocative melody was a fitting end to a memorable night. Palmer has recruited two expert musicians to ensure that this trio will never disappoint. The worldâ€™s elite drummer must surround himself with the best sidemen and he certainly has. A legend has to live up to his legacy and Palmer did on this night at B.B. Kings.