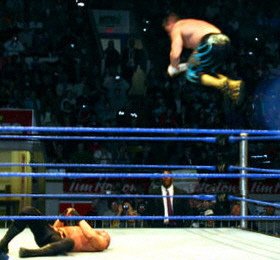 Professional Wrestling is all about fan appreciation. The more an athlete is willing to put their body on the line, the more the fans will pay their hard earned money to see them perform. Over the past 20 years, Cruiserweights and Light-Heavyweight competitors have taken this to a whole new level by going off the top rope in ways that a wrestler from the past like Lou Thesz could only dream of.

In this exclusive top ten, Review Fix EIC Patrick Hickey Jr. shares some of the most exciting moves to ever be performed off the second and top ropes.

10: The Blockbuster: Sure, Marcus â€œBuffâ€ Bagwell is a mediocre footprint in wrestling history, but his flipping second rope neckbreaker was pretty damn cool. {9:14 on this video}

9: Diamond Dust: A forward somersault three-quarter facelock bulldog/jawbreaker made famous by Taka Michinoku and now used by TNAâ€™s Shark Boy. If used properly, it can be a devastating finisher.

8: Frog Splash: Say whatever you want about Dâ€™Lo Brownâ€™s inability to keep his dancing partners safe in the ring: the guy did a fantastic frog splash. However, no one did it better than Eddy Guerrero, who armed with a wicked brainbuster as well, made it part of one of the best one-two combinations in wrestling history.

6: Best Moonsault ever: Chris Danielsâ€™ trademark moonsault has been imitated time and time again for a reason: itâ€™s quite possibly the niftiest version of the move ever.

5: 450 Splash: This is a move currently being used by the WWEâ€™s Justin Gabriel, but one used by everyone from Marc Mero, to Flash Funk and even Juventud Guerrera. Essentially two flips in mid-air into a front-body splash, this move not only hurts the person itâ€™s delivered on, but the person giving it as well.

4: Diving corkscrew somersault into either a leg drop or senton: This is a move made famous by AJ Styles, which he named â€œThe Spiral Tap.” Teddy Hart also uses it as his finisher, calling it â€œOpen Heart Surgery.â€ Seeing a guy spin like that in the air and then land on the back of his head is a treasure to behold and make no mistake about it, itâ€™s no easy task.

3: Dragonrana: Guys like the Ultimo Dragon and Rey Mysterio made this move something special before their bodies wore out on them. Jumping from the top rope, theyâ€™d land on their opponents shoulders and seamlessly hurricanrana them to the ground, in a pinning position. Later on, WWE diva Lita made the move a staple in her repertoire, but would head scissor her opponents instead. Strangely enough, it hasnâ€™t been used much since.

2: Top rope rocker dropper: Guys like Marty Jannetty, Chris Canyon, Billy Gunn and Little Guido have used this in the past and proves that if a move is good on the ground, sometimes itâ€™s even better off the top rope.

1: Shooting Star Press: Billy Kidman was one of the first wrestlers in America to use it as a finisher. Chris Jericho broke his arm doing it in Calgary. Amazing Red has a pretty sweet version of his own, but Evan Bourne does it better than anyone else today, in what is easily the most exciting aerial maneuver in the sport today.

Note: All videos are property of their owners on Youtube.