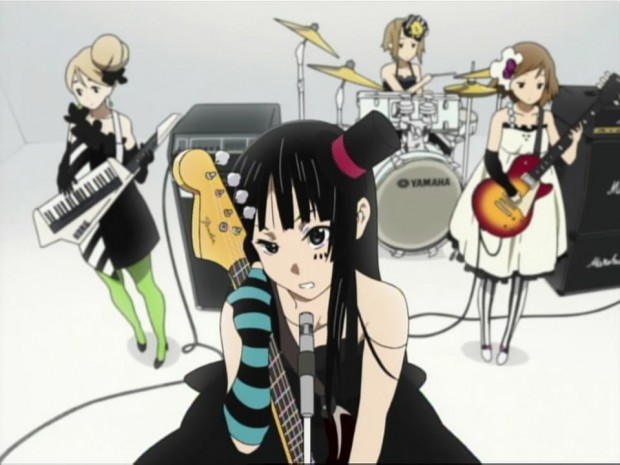 Practically everyone has had a dream of starting their own band. Just you, a bunch of your high school buddies, and very little talent. Thatâ€™s where the new Shojo anime, K-on, comes into play. Bandai has released the first few episodes on DVD with the next four coming in July.

Is it rockin or is square?

K-on starts with your typical air-headed, klutzy and lazy high school girl named Yui who has just started high school. Yui wants to join a club but, because of her limited talents, she canâ€™t decide which is the right one. Meanwhile, friends Ritsu and Mio decide to join the Light Music Club. One problem: all the members have graduated and according to school regulations, all clubs must have at least four members or else it must be disbanded. Good thing. They eventually coax Yui, with the help of fourth member Tsumigi â€œMugiâ€ and her constant supply of cakes, into joining the club. Now they have one goal: be good enough to play at Budokan, Japanâ€™s largest and most prestigious venue.

Episode one starts out very slowly. It doesnâ€™t catch the attention of the viewer very well and only makes one mildly interested in the series with the entire episode being just â€œYui joins a club. The End.â€ The series does slowly pick up speed where we slowly do see each characterâ€™s personality. It still wonâ€™t hold the attention of most viewers, however, seeing how a story of a bunch of girls trying to make it big as a band doesnâ€™t sound very enticing to some. Thatâ€™s not saying K-on is bad. It just needs to pick up steam and find a way to stand out from other Shojo anime of its kind.

The best things about K-on are its opening and closing songs. The opening song, Cageyake Girls by Aki Toyosaki, is a cute but rocking piece that sounds like those old bubble gum pop/rock songs from the ’90sÂ  that still get stuck in your head. The closing song, “Donâ€™t Say Lazy” by Yoko Hikasa, is the highlight of the two songs. It is a very fast electronica/rock female version of the Stabbing Westward style song that belongs on everyoneâ€™s I-pod. It will be stuck in your head and it will have multiple plays on your I-pod. Your lighter will also finally have a new song to light up to.

K-on may not be perfect, but you canâ€™t really judge an entire series on just four episodes. Some may still want to wait for the other episodes to reach the states but most will just skip it. It all depends on oneâ€™s style. Rent it to see if you like it. The opening and closing songs are definitely worth a listen.