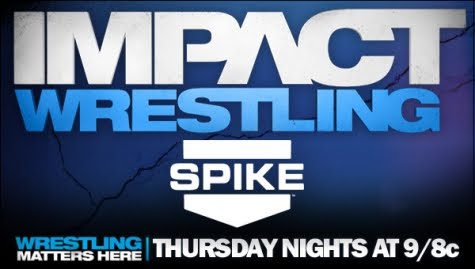 After TNA looked like they ate their Flintstones vitamins last week, they stumbled this in this weekâ€™s episode of Impact. Promo-heavy and lacking any real compelling moments, this show wasnâ€™t worth missing the NBA finals for.

It all started on the wrong foot. After two weeks of cut to the chase TV, which saw TNA get to the in-ring action much quicker than they have in the past, TNA wasted the first 15 minutes with a promo between Eric Bischoff, Hulk Hogan, Sting and Mr. Anderson. With Slammiversary a few days away, TNA would have been smart to have some high quality matches with not a wasted minute. While thereâ€™s an obvious need for promo on the last show before a pay per view, too much of it was poorly written and lacking any real context or emotional connection.

On top of that, the matches were average and werenâ€™t enticing enough.

Last week, it appeared that TNA was moving in the right direction and was ready to make good on their new slogan, â€œWrestling Matters.â€ This show proved that they arenâ€™t quite ready to live up to their own expectations.

Angelina Love and Winter vs. Tara and Mickie James: A mediocre match that was highlighted by Loveâ€™s finishing move. A reverse DDT/backcracker-type move, itâ€™s one of the best female finishing moves in the business. Now if theyâ€™d just get her out of this ridiculous program with Winter, then sheâ€™d be ready to be a legitimate challenger for the Knockouts championship.

Alex Shelley and James Storm vs. Hernandez and Anarquia w/ Sarita and Rosita: A match that had a decent flow, but was more about establishing Mexican America as a legitimate tag team threat and exposing the communication problems of the newly formed Gun Money. The British Invasion team of Magnus and Doug Williams were ringside during the contest. Magnus didnâ€™t help his team get over and provided lackluster commentary that was only saved by Taz calling Magnus a bastard. Overall, this match didnâ€™t do its job. It wasnâ€™t entertaining and didnâ€™t convince anyone that Shelley and Storm canâ€™t beat a British Invasion team that was simply thrown into the mix to see what sticks.

Bully Ray vs. Rob Van Dam: A short back and forth match that ended with a five-star frog splash from RVD. Nothing special.

ODB vs. Velvet Sky: A long, hard-fought battle between this two that ended when Sky dropped OBD with a sloppy DDT. In spite of that, Sky sold a lot of offense and is getting better in the ring, but has a long ways to go before she can make any win she has over ODB look believable.

Mr. Anderson and Gunner vs. Sting and Eric Young: An average match that above all else, makes Gunner look primed to get the TNA TV title back. Hitting Sting with his variation of the F5 for the win, Gunner, like Crimson is one of the only blue-chip prospects the company has. Itâ€™s nice to see them giving him a push.