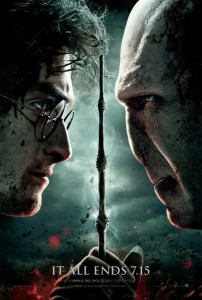 Potter mania is alive and well with the last Harry Potter Movie, “Harry Potter and the Deathly Hollows Part II,” finally released in theaters to great anticipation. Through the series, weâ€™ve seen these actors grow from little kids to mature adults. As well, the movies have gotten darker and more mature too.

However, after each movie, it was always easy to wonder if the new addition to the series would break the mold and lose the sustainability that has made it so special.

But have no fear this time around. Itâ€™s safe to say “Deathly Hollows Part II” exceeds all expectations.

It’s totally worth it.

We finally see the epic final battle between Hogwarts School of Wizardry verses Voldemortâ€™s death eaters. This time, the battleground is Hogwarts itself. We also see what the other horcruxes are and how Harry and Co. deal with getting rid of them. We also see secrets revealed about why Harry and Voldemort are connected and why heâ€™s the only person to ever survive the killing curse. Itâ€™s safe to say that the answer will shock a lot of people who have not read the book.

With that being said, expect the body count in this movie to be high.

Unlike part one, which was slow-paced and story heavy, part two is nonstop action from start to finish, once Harry and company retrieve a horcrux from Gringotts, the bank found in Diagon Alley. There is a lot of magic flying around, bodies piling up and visuals that are some of the best in the history Potter franchise. The dragon being held captive in Gringotts is one of the best dragons ever seen on the screen. The acting is the same excellent work that we’ve come to expect after the fourth film and it shines here as well. Daniel Radcliffe puts on his best performance as Harry yet. One of the more touching scenes is when Potter surveys the fallen.

It is pulled off so well that some viewers have even shed tears watching it. It is that gripping of a scene.

The final battle between Harry and Voldemort is pulled of so well that youâ€™ll be on the edge of your seat throughout the entire sequence. Itâ€™s one big back and forth battle that starts with the iconic trailer scene where Harry pulls himself and Voldemort off of one of Hogwartâ€™s towers.

Itâ€™s also nice to see Mrs. Weasley get into a fight herself and showing off that sheâ€™s one witch you donâ€™t want to mess with. Also, Neville Longbottom redeems himself by showing he is not totally useless by standing up and beating wizards who are leagues ahead of him. Ron and Hermione also shine with their own horcux hunting. The chemistry between the two actors is spot on.

At long last, the Harry Potter actors have grown up along with their fans and that journey ends here. With great action scenes, superb acting and great visuals Harry Potter and the Deathly Hollows Part Two is a great conclusion to the Harry Potter franchise. Potter fans will be talking about this movie for years.

Godric Gryffindor would be proud.