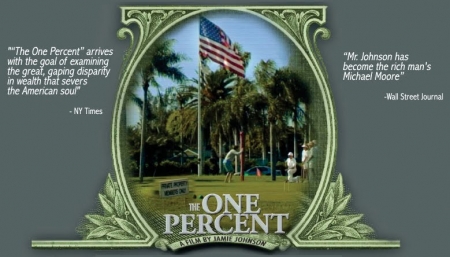 Johnson & Johnson heir Jamie Johnson examines the vast wealth gap that exists in the U.S.Â  He uses his name to gain unprecedented access to some of the richest families in the country. The â€œone percentâ€ refers to the small percentage of Americans who control almost half of the countryâ€™s wealth. Interviews include editor-in-chief of Forbes magazine, Steve Forbes; economist Milton Friedman who coined the â€œtrickledown effect;â€ granddaughter of Warren Buffett, Nicole Buffett; and Bill Gates Sr.

â€œMakes sense to me to encourage wealthy to generate that wealth, so that wealth can be shared rather than take it from individuals to then redistribute it through social policy of Medicare, social security, etc.â€ -Â  Greg Kushner, Lido Wealth Conference Director â€“ creates wealth conferences for the rich.

â€œOne day I want to go to the moon and look at the earth and say, â€˜thatâ€™s part of my portfolio.â€™â€-Â  Paul Orfaley, Kinkos founder

â€œThree big tools have been used in a lot of areas. First, you build a big police station. Second, you tear out all the basketball courts. And lastly, if thereâ€™s a local public school poor people attend, you tear down the school.â€-Â  Karl Muth, investment heir

This film details how corporations have influenced our society. It covers corporationsâ€™ relationship to the government, water privatization, and media control and genome projects. The directors focus particularly on the legal decision that corporations are legally people. According to them, judges signed away rights of people and gave them to corporations. It is this decision that has greatly influenced their power in the U.S.

Through case studies, the directors examine the organization model of corporations.Â  Their conclusion: corporations behave like psychopaths without a conscience who put profit for shareholders above all else.

â€œThe great problem of having corporate citizens is that they arenâ€™t like the rest of us. As Baron Thurlow in England is supposed to have said, â€˜They have no soul to save, and they have no body to incarcerate.â€™â€ â€“ Robert Monks, CEO LENS

â€œWeâ€™re predators. If youâ€™re a CEO, do you think your shareholders really care whether youâ€™re Billy Buttercup or not? Do you think that they really would prefer you to be a nice guy? Over having money in their pocket? I donâ€™t think so. I think people want money. Thatâ€™s the bottom line.â€ â€“ Marc Barry, corporate spy

The documentary from filmmaker Michael Moore, examines the impact of corporate dominance on the average Americans. The film centers on the financial crisis that started under the Bush administration and is still occurring. The film looks into for-profit prisons, corporate-owned life insurance, Goldman Sachsâ€™ relationship with Washington and poverty levels in the U.S. He also examines whether capitalism should be considered a sin.

â€œGoldman Sachs set aside $6.8 billion for bonuses in 2008, the same year in which they accepted $10 billion in TARP funds from the American taxpayer.â€