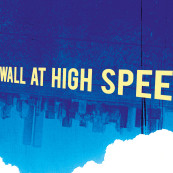 Your breath is taken away from the first moment you walk in to the theatre. However, the warm decoration of the stage, the bright, but soft lights create a welcome atmosphere, which doesnâ€™t lack elegance.

As the play begins, you can grasp the vigorous mood of the story. The viewerâ€™s expectations are fully justified with one dramatic scene followed by the revelation of the of charactersâ€™ charisma and charm.

â€œItâ€™s all just the wind,â€ said Donnie to his wife, standing on the rooftop of his house, prior to making a decision between life and death.

The unexpected ending is accompanied by attention-gripping scenes which provoke a range of emotions in the crowd. Whimpers and quiet crying can be heard among the audience, which is sad and stunned.

Donnie is ambitious and full of vim and vigor. Five months ago, he was ready for lifeâ€™s challenges, waiting for his dream come true. He maintained a dignified patience and order in the house; however, he experienced a complete breakdown. Like going through Dante Alighieriâ€™s nine vicious inferno circles, he went through a series of phases of human degradation.

Even though the story of 9/11 has been told countless number of times, Halfnight accentuates it and shows the â€œbehind the scenesâ€ of the tragedy, which serves as a catalyst to Donnie and Juneâ€™s family sufferings. Their intricate story becomes closely linked to Trout, Donnieâ€™s brother and Marcy, Troutâ€™s girlfriend life.

As the story unfolds, Donnie looses this capability as well as meaning to his existence. A professional pilot and a master of this craft, he becomes obsessed with flying planes when this privilege and his career is taken away from him.

The dream of having his own company and flying planes everyday, with each of his children being a pilot, is ruined the day when two planes crashed into the World Trade Center. Ironically, his son is born the next day after the tragedy. The blame and burden goes to his shoulders and doesnâ€™t let him go. The ignorant judgments and sharp comments can be heard form his neighbors and people in the town. They donâ€™t let him recover and put more stress on him.

Considering his temperament and a strong personality character, one person cannot stand against the angry mob and fight them alone. As a result, he looses this fight and his sanity.

Intense silence echoes in the speechless, breathe-catching audience, which is preceded by adrenaline-rushing scenes with unexpected gunshot and a real fight between brothers.

In the beginning, Donnie is in complete self-control of his emotions and actions. His brother Trout, on the other hand, is the most irresponsible man in the world, who lives in his brotherâ€™s basement and uses drugs once in while. Itâ€™s hard to believe that 9/11 would change these two characters completely and make them see the world from a new angle.

An outstanding character development accompanied by distinctive actors work transcends expectations upon the play.Â Almost every scene contains sarcasm and heavy irony, together with vigorous dialogues, deep psychological riddles and emotional blockage of the main character. Halfnight is able to incorporate sexual aspects and intentionally created complications between each of the characters. It conveys the better understanding of the inner world of his â€œbabies,â€ as well as allows to see their growths, or degradation in some cases.

The ability to demonstrate human inner conflict makes this play as real as the life itself. The sense that people can relate to the characters was obvious according to the audienceâ€™s passionate reaction.

â€œA Hard Wall at High Speedâ€ is an emotionally thrilling and intense play that doesnâ€™t let you come back to reality. It keeps your thoughts in the created world. Halfnight doesnâ€™t give out the ending of Donnie and Juneâ€™s life. There is a little hope that these charactersâ€™ life can change for better, but it will never be the same.