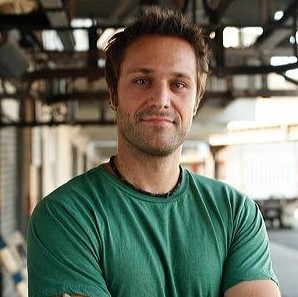 During his career as a professional hockey player, his nose was broken a couple of times. He even has some scars as souvenirs.

But that was his previous life.

Now, Ashlin Halfnight sits in the front row in the theater, eloquently discussing his new play with a director and watches it come to life on the stage.

Years ago, he couldnâ€™t imagine, even in his most spectacular dreams, that one day he would be a playwright. Drafted by the Hartford Whalers in 1994, he was a steady puck-moving defenseman and even made it to AHL, playing defense for New Heaven for two years.

But there is nothing left of that gritty hockey player now.

He is a playwright.

â€œI stopped playing hockey because of a combination of things: a few concussions, a botched contract and, to be honest, a lot of boredom,â€ said Halfnight. â€œIâ€™d lost a few teeth, I was sporting a thrice broken nose. I kept it to myself, though, because I didnâ€™t want the coach, or the management, to think I had a soft head.â€

Halfnight grew up in Toronto, Canada and came to America to go to Harvard. Most of his childhood was spent playing hockey and other kinds of sports; however, his life went through series of twists and turns when he moved to New York.

He came to the Big Apple with the intention to do something different, but he started to work as a waiter after he turned down a pro hockey contract for $ 35,000.

But Halfnight was never just a hockey player. He earned his baccalaureate degree in Harvard University and a masters degree from Columbia University.

Halfnight started writing plays when he was 25 years old. By that time, he experimented with playing on stage and almost quit hockey practice. However, he got nervous every time prior going to perform and he came up with a decision that it wasnâ€™t for him. â€œBehind the scenesâ€ role suited him better.

He now he has more then 30 plays in his repertoire. But when he first stated to write, he went through multiple drafts and rewrites. However, the fruits of his work were fresh, unique and didnâ€™t taste like anything else.

â€œThere might be some genesis out there who may write a great play. I think, realistically, In order to write more than one good play you need to practice and practice and practice,â€ said Halfnight. â€œIt always takes longer to get it how you want it, then you think itâ€™s going to.â€

He doesnâ€™t dedicate every moment of his life to playwriting though, especially considering his day job as a teacher and new role as a husband- a couple of hours on a weekend morning can do him good. Thatâ€™s usually when heâ€™ll add another scene to a new play.

Halfnight finds his inspiration in music. It sets the mood and creates visual pictures that help him to write a play.
â€œThere is a rhythm to music and a rhythm to dialogue and a rhythm to theatre and a rhythm to poetry that is all sort of tied together,â€ said Halfnight. â€œI like singers and song writers, people who are quieter rather than louder. I listen to Joe Purdy, Craig Cardiff. The piano and acoustic guitar kind of musicâ€

The emotional intensity of this drama and the sufferings that the main character goes through make Halfnightâ€™s work one of a kind. The performance is about a pilot with an attractive wife, a decent house and a dream that he caries with him during his life. When the main characterâ€™s life begins to fall apart, he loses everything he has, his job, his wife and his sanity. Even his life is under a big question mark.

â€œItâ€™s a play about a guy who falls apart after an event, which happens to be 9/11,â€ said Halfnight. â€œI think for me itâ€™s really about how we recover after something that is difficult. For me itâ€™s much more about the family.â€

Halfnight also likes to participate in the production process. However he doesnâ€™t intervene with the process too much. He relies on the director and actorâ€™s skills, who bring all the character to life.

When Halfnight starts to write a new play, the idea doesnâ€™t always come first. The inspiration as well as the concept of a new play can come from a heard conversation at a bar, or from an image once seen.

â€œIt [sport] takes years to perfect, I think playwriting is exactly the same,â€ said Halfnight. â€œAs athletes look for the perfect game, and as theater artists, we search for the perfect play, the perfect performance. Itâ€™s all adrenaline and focus. I like that.