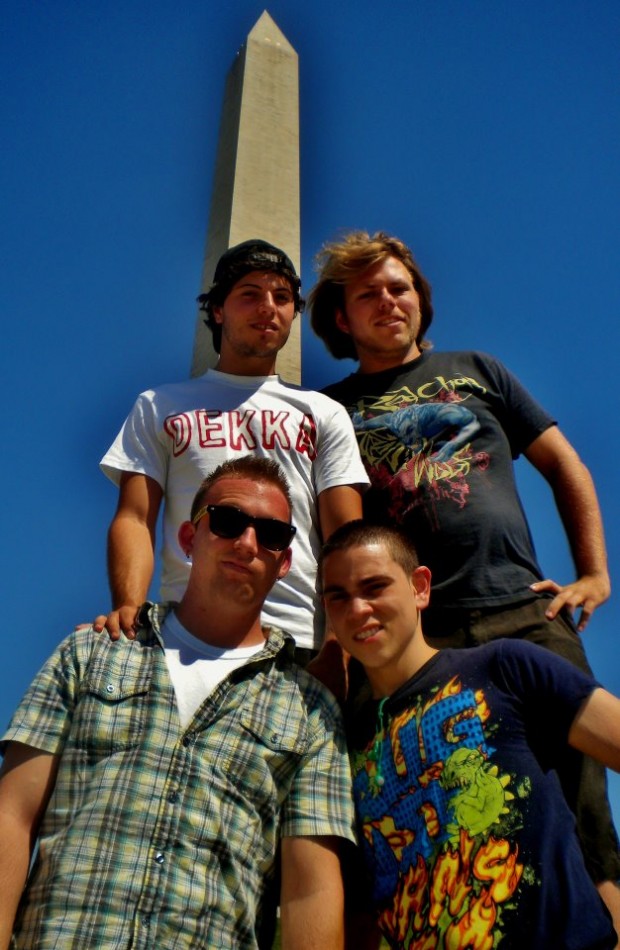 A few teenage males enter a thrift store. On a tenacious search for t-shirts, they come across one shirt in particular. On the shirt, a football player runs through a wall and the words â€œBreak On Throughâ€ appear all around. They didnâ€™t buy the shirt, but they knew right then that they had found their band name.
The discovery occurred five years ago, and plenty has happened since for Floridian punk rockers Break On Through.

Break On Throughâ€™s currently made up of Mike Calabria (Vocals/Guitar), Daniel Hernandez (Guitar/Vocals), Chris Knight (Bass/Vocals) and Seth Bailen (Drums). The membersâ€™ ages range from 21 to 24, just four high-spirited individuals who like to party and play shows.

â€œWe play music because we love to play music, not because people come out,â€ said Calabria. â€œThough thatâ€™s a great plus, thatâ€™s how it is.â€

Back in 2006, the local music scene in Florida surged with countless great bands filled with limitless potential and many people came out to support them. Somewhere along the way though, these bands broke up, places shut down, things werenâ€™t like they were before and the scene lost its touch.

Break On Through noticed these changes in the scene and fought through them as they played show after show. Just to organize a good show seemed to be a task and a half. The band was eager to play a show whenever and wherever the opportunity presented itself.

A year later, Break On Through began to play shows outside of Florida, as they toured the Southeastern USA in July by themselves and released a self-titled LP in August.

But things really cooked up in 2008 when they caught their first big break when they got an opportunity to tour with NOFX, Dillinger Four and The Flatliners in October.

â€œI ran into NOFXâ€™s guitarist Eric Melvin at one of their shows in South Florida,â€ said Calabria. â€œI kept in touch with him and we became pretty good friends. They invited us on the shows and we got to play.â€

That tour was the match that lit the bandâ€™s fire. It made them believe that anything was possible. That idea kept the band prevalent, as they finished the year off with an East Coast tour in December with Mute Issue, another local Florida band.

In July 2009, they toured the East/Mid-Western USA by themselves and released their first EP, â€œPulling Teeth.â€

Things calmed down considerably for the band, as they experienced some lineup changes- their drummer quit, and Hernandez and Bailen were soon added to the group as replacements.

In July 2011, they toured the East Coast again with Mute Issue.

â€œWe booked that tour ourselves and just went for it,â€ said Bailen. â€œA lot of fun for the experience, but also really tough as well, but we all enjoyed that together.â€

In October, another huge opportunity came along, even bigger than the first.

They toured with NOFX, Anti-Flag, and Old Man Markley and played shows at big venues such as Irving Plaza, House Of Blues and Starland Ballroom.

This was the first time they played with Anti-Flag as well as Hernandez and Bailenâ€™s first big tour with the band.

â€œIt was an honor to actually share the stage with people you grew up listening to,â€ said Calabria.

â€œThose shows provided a great experience, but was also really nerve-racking, especially when you know youâ€™ve got to give it your best in such a short time,â€ said Hernandez.

A tour with established bands like NOFX and Anti-Flag sure has its upsides as opposed to the â€œDo-It-Yourselfâ€ tours with other local bands as they did many times before.

â€œEverything runs smoother, things are taken care of, people are there to help you set up your stuff, thereâ€™s no feedback and the stage is comfortable,â€ said Bailen. â€œA lot of musicians donâ€™t get the chance to really experience things on a grander scale.â€

New York, Philadelphia and Boston were their favorite places in terms of the people, places, and without a doubt, the food.

Break On Through has experienced a handful of adventures on their tours. In Boston, they went to a bar owned by The Dropkick Murphys and met the bassist and even played a sweat-filled show in Georgia at a kidâ€™s house in his Grandmaâ€™s shed.

â€œHis Grandma yelled at us the whole time to finish up even though he told us he puts shows on in there all the time,â€ said Bailen. â€œShe was like, â€˜Whenâ€™s this gonna be over?â€™ and heâ€™s like, â€˜I told you Grandma, the showâ€™s gonna be over soon!â€™ and then everyone started to dance with his Grandma.â€

Another distinct quality of the band is the membersâ€™ difference in musical influences, from other punk acts like No Use For A Name, to alternative bands like Thrice and Rise Against, and even hardcore bands like Comeback Kid.

Hernandez comes from a background of heavier music, as he often listens to bands like Killswitch Engage and August Burns Red, while Bailen listens to and plays jazz in his free time.

The band truly believes their musical style diversity leads to a certain cohesive originality unmatched by any other band.

â€œEveryone listens to different stuff,â€ said Hernandez. â€œItâ€™s cool because when we write music together, we get a unique sound.â€

The band also appeared on numerous punk compilation albums over time (Florida Ska-Punk, Swamp Cabbage Records) and released their latest single, â€œIâ€™m Getting Too Old For This,â€ (available digitally at Interpunk) this past July.

The song deals with life in this day and age where everybody goes and posts their lives on the internet and how itâ€™s all just one big joke.

Chosen out of four songs the band recorded in a session earlier this year, there was something about the song the band favored over the other three as a single.

â€œâ€˜Iâ€™m Getting Too Old For Thisâ€™ was the one that was fast and in-your-face,â€ said Bailen. â€œItâ€™s what we want to represent; that really fast melodic hardcore style.â€

With the success of their October tour with Anti-Flag, NOFX and Old Man Markley, Break On Through looks to continue their momentum. They plan to get back into the studio to work with a man named Justin from a band called Fallen From The Sky and look to release another EP before Summer 2012 to be followed up with a single from it.

â€œThe music will be a lot more energetic and in your face,â€ said Bailen.

â€œA lot of really good melody, especially because of all the different types of music we listen to,â€ said Hernandez. â€œJazz, metalâ€¦ theyâ€™re all based off influential harmonies and weâ€™ll find a way to incorporate that.â€

You could dismiss Break On Through as â€œjust another punk band,â€ but they believe several key things swiftly set them apart from everybody else.

â€œOur influences, who we are and where we come from,â€ said Calabria. â€œAs well as what influences us to write from a personal perspective bleeds out to who the band is, as thereâ€™s a lot of different elements to what we put on audio and when we play live shows as well.â€