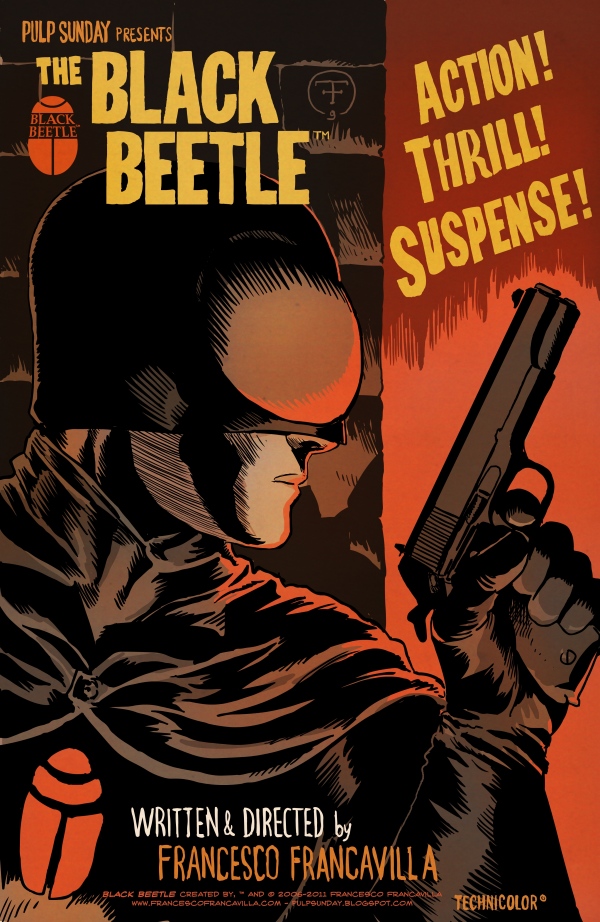 The Black BeetleÂ is centered on a pulp-noir character and takes place in a fictional universe thatâ€™s based in Colt City. Francavilla published several stories online and even put out an ashcan. When the ashcan sold out, Francesco quickly realized that many fans were interested in exploring this world with him. It was only a matter of time before Dark Horse approached him about bringing someÂ Black BeetleÂ tales toÂ Dark Horse Presents!

â€œIâ€™m working on a 24-page story, titledÂ â€˜Night Shiftâ€™ that will be spread over three issues ofÂ Dark Horse Presents. I am hugely influenced by pulp stories of the â€˜30s and â€˜40s, and wanted to develop a series that used that influence as a jumping-off point to explore some modern storytelling with fun twists. I think this will be a great introduction to readers who are new to this character and universe, but will also be an exciting new adventure for those whoâ€™ve been reading the online stories over the years,â€ Francesco states.

â€œAs a huge fan of pulp and noir, working on my own characters and stories really gives me free reign to explore this world and create lots of fun scenarios and thrilling situations. The stories are definitely full of mystery and intrigue, plus I get to giveÂ The Black BeetleÂ lots of cool and funky gadgets. â€˜Night Shiftâ€™ promises to be full of action, excitement, danger, and double-crosses, so I am overjoyed to see this new tale in print, and hope this is the first of many more to come inÂ Dark Horse Presents.â€

Since 1986, Dark Horse Comics has proven to be a solid example of how integrity and innovation can help broaden a unique storytelling medium and establish a small, homegrown company as an industry giant.Â The company is known for the progressive and creator-friendly atmosphere it provides for writers and artists.Â  In addition to publishing comics from top talent like Frank Miller, Mike Mignola, Neil Gaiman, Gerard Way, Will Eisner, and best-selling prose author Janet Evanovich, Dark Horse has developed such successful characters as the Mask, Timecop, and the Occultist.Â Additionally, its highly successful line of comics and products based on popular properties includesÂ Star Wars,Â Avatar: The Last Airbender,Â Buffy the Vampire Slayer,Â Aliens,Â Conan the Barbarian,Â Mass Effect,Serenity,Â and Domo.Â Today, Dark Horse Comics is the largest independent comic-book publisher in the United States andÂ is recognized as both an innovator in the cause of creator rights and the comics industryâ€™s leading publisher of licensed material.