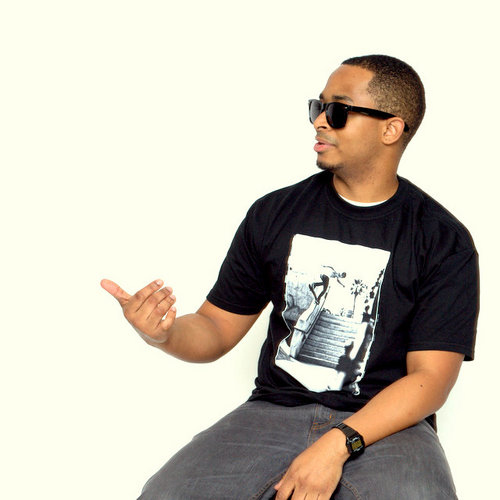 Michael Jules, aka Lerix, is an atypical hip-hop artist from Brooklyn. Seeing him walk down the street, you would never think he’s a musician, much less a rapper. Be-speckled and dressed in a simple t-shirt with jeans, coupled with sneakers, heâ€™s just an all around ordinary guy with an extraordinary ability to spit, lyrics that is. Drawing inspiration from television and movies, one should look closely for little quips and tricks in his sound. An aspiring original and quite perfection, Lerixâ€™s hardest critic is himself.

Review Fix: Why are you such a hard man to find?

Lerix: When Iâ€™m working on music, I try to stay in whatever creative zone Iâ€™m in for as long as possible. Lately Iâ€™ve been getting a lot of inspiration from movies and obscure television shows. Iâ€™m either zened out in my house somewhere listening to that or watching that or in the studio or writing, so Iâ€™ve been kind of caved in. Also working with other producers, which is kind of hard because I have to chase them down, get the beat right, and wait for them to send it back to me; I like to work in person, so it gets a little tough. It packs a lot into the day on top of work and regular life.

Review Fix: I see that you put a lot of pop culture into your lyrics?

Lerix: It happens a lot, and I keep doing it, its fun that way. When you listen to artists, who later on you say â€˜oh thatâ€™s what he meant.â€™ That makes the song better.

Review Fix: What is more important the rhyme and flow, or the meaning?

Lerix: When I first was doing this, I was a straight up backpacker, like I was â€˜lyrical miracle, Iâ€™m on the comet you canâ€™t stop me,â€™ cause I wanted to have a structure put into bars, how dope I am, as much as possible. As you get older, you realize thatâ€™s not important as you come across different experiences. I try to blend it now, so I try to be as lyrical as I can, if itâ€™s easier to say you broke my heart , then Iâ€™ll just say you broke my heart, rather than trying to find some ultra poetic devise. Itâ€˜s a good middle now. I think a kid kudi does that better, so I let him do it and Iâ€™ll try to stay in the middle?

Lerix: Thatâ€™s tough. Old me would say Lilâ€™ Kim, thatâ€™s what Brooklyn does, and Kim has hits but as of right now I would say Nikki Minaj, because however you feel about her, she does keep you entertained and she can spit. Sheâ€™s dope, and sheâ€™s out there and sometimes you canâ€™t go with her. Youâ€™re just like what is she doing, but she does it; itâ€™s good to push the culture forward.

Lerix: Beyonce. I donâ€™t see the appeal of Rihanna. I like some songs, S&M, but for the most part her success is being the urban Katy Perry; she doesnâ€™t do it for me. What turned me off to her too, is that she doesnâ€™t write at all. Reading that she has a staff of 12 writers that help her put together her albums, of course she adds her own thing to it, thereâ€™s something to be said for not writing at all; what are you really bringing to the table: a voice. Itâ€™s so deliberate, you make a Frankenstein. Thatâ€™s why I donâ€™t like those American idol shows, theyâ€™re deliberately making these people stars and shoving them down our throats.

Lerix: Onyx, because I came up listening to them. At least in the east coast, that was our thing it had more of an east coast feeling. Iâ€™m not a thug at all, but it made me feel cool, tough.

Lerix: What do you mean, I just murdered somebody? No, I used to skate and thatâ€™s probably what you see. I am pretty simple; the stuff I like; it wouldnâ€™t be far from this. Iâ€™m a t-shirt junkie. I wear them in the winter and wonder why Iâ€™m freezing. I do love S&D, thatâ€™s the skater. I had to get off the sneaker thing because it was hemorrhaging money. But I was a big sneaker head, and Iâ€™m a gadget person. Iâ€™ll probably have a big super clunky watch on. Even with billions of dollars Iâ€™d probably still dress the same way. If I make it, throw this out Iâ€™m getting big watches that spin.

Review Fix: Where do you get your positive lyrics from?

Lerix: Itâ€™s really about how Iâ€™m feeling in that certain moment, and thatâ€™s usually how most songs are. They literally just represent a moment. So if there was any song you particularly found positive or inspirational , it was just how I was feeling and I was able to channel it all in. I canâ€™t say itâ€™s something I do on purpose even though Iâ€™m conscious of a lot of the things I do write. There are a lot of other artists who cover those things [obscene or demeaning lyrics] so thereâ€™s no need for me to do it. Itâ€˜s really just about how I capture a moment.

Review Fix: Are there any subjects that are off limits?

Lerix: No. As private as I can try to be, Iâ€™m really honest, so one supersedes the other one. I would probably be super private as far as life, but when I sit down with pen and paper or blackberry; I spill it all, as long as it makes sense. I talk about girls and exes, but I probably wonâ€™t mention names. If I make a song about one of them, I wonâ€™t ever point that song out to them; sheâ€™ll have to find that out on her own.

Review Fix: How did your cousin Hank Love of 105.9â€™s â€œHank Love and DNA showâ€ inspire you?

Lerix: I was the oldest of three and at the time he was the oldest male role model in the house. I didnâ€™t know his show was popular until a kid in school, who was big into hip-hop music, would say â€˜Oh Hank Loveâ€™ and I would say how you know my cousin. It was this really niche underground station. It was a big influence as far as getting my ear into hip-hop more because at the time I was more into R&B, in the house with six girls the radio was on lock. Finally I got into hip-hop and rap with him; it was dope, more of a boysâ€™ club.

Review Fix: In a 1994 interview with Roger Rabbit of Strictly Spanish, he [Hank Love] said that record labels were shady and that new comers should be aware of that. What do you think?

Lerix: Record labels are shady, not all. I probably wouldnâ€™t say shady, but they have an agenda and their agenda is to make money. That is respectable, but theyâ€™ll do it at any cost and thatâ€™s not cool; like make a certain artist change from what he was originally and thatâ€™s not cool.

Review Fix: To what extent would you be willing to change?

Lerix: Itâ€™s easy to say I would never do it, but when youâ€™re put into that situation it could open a lot of doors. I think, in the end, I wouldnâ€™t change much.