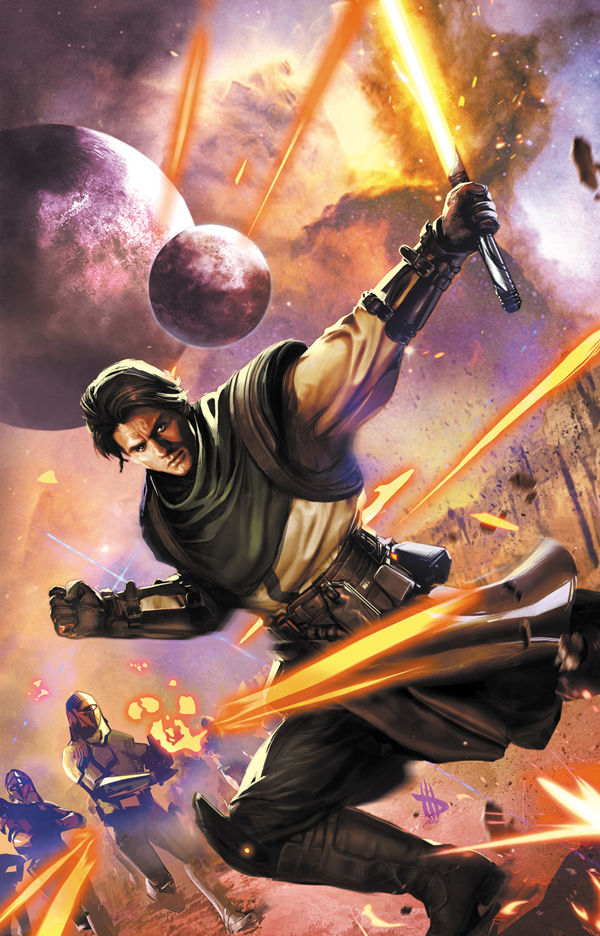 Itâ€™s a grand old tradition in the Star Wars universe to focus on major wars. One of these wars that have sadly been pushed aside by many writers is the Mandalorian Wars. Star Wars fans want to know what exactly happened during these wars because, hey, Mandalorians are awesome. Dark Horse has heard the cries of Star Wars fans and released â€œStar Wars Knights of the Old Republic: Warâ€ Â by John Jackson Miller.

Issue one starts off with the Mandalorians taking Essien and the Republic has sent Jedi to help out. One of these people sent down there is Zayne Carrick, a failed Jedi who everyone believes to be a jinx.

There isnâ€™t much story in volume 1, it’s mostly action, but what story there is okay. Nothing stands out so far except Carrick. The idea of a Jedi whoâ€™s a complete mess up? What has the world come to? Thatâ€™s the most brilliant idea in a Star Wars story to ever be written. Itâ€™s about time thereâ€™s a Jedi whose flaw is not â€œhe has a dark future.â€

As for the action itself, itâ€™s your typical Star Wars far with lasers blasting all over the place and things going boom. Not much Jedi action and lots of action from non-Jedi, which is good because the biggest problem with many Star Wars stories is too much Jedi and not enough non-Jedi characters. Yes, the Jedi are important, but please let the non-force users have time in the spotlight. This is a warm welcome to the series.

The cover art is very misleading. You have this awesome design of a Jedi running in a burning wood that looks like some of the best artwork Dark Horse has. When you get to the comic itself, however, youâ€™re treated to mediocre art. Itâ€™s not horrible per se, it just looks like an average Saturday morning cartoon nobody notices the artwork at all. Itâ€™s a tease.

â€œStar Wars Knights of the Old Republic: War Volume 1â€ is an OK title that looks like it has room for improvement in the next four volumes. Star Wars fans will gobble this comic up in no time flat and anyone craving for some Mandalorian action should pick this and up. Itâ€™s the closest youâ€™ll get to reading about the Mandalorian Wars without having to wade through Fanfiction.net, but with better writing and artwork. Mandalore would approve of this comic.