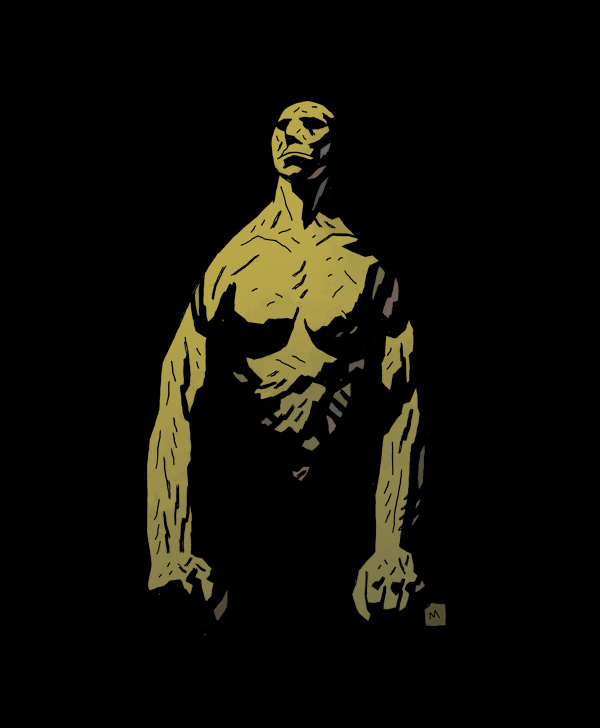 In conjunction with the release of Mike Mignola and Christopher Goldenâ€™s latest collaboration earlier this week, and Mignolaâ€™s appearance at this weekendâ€™s World Horror Convention, Dark Horse is pleased to announce a limited-edition hardcover release of Joe Golem and the Drowning City.

After a sÃ©ance gone horribly wrong, strange men wearing gas masks and rubber suits abduct the aging psychic Orlov the Conjuror, sending his young assistant Molly McHugh racing through the canals of a submerged Manhattan. As Molly flees her captors through a sunken city full of scavengers, her one hope comes in the form of two strange men: Simon Church, a Victorian-era detective kept alive by clockwork gears and magic, and his assistant, Joe, whose mysterious past is hinted at in dreams of stone and witches.

â€œJoe and his world are made up of all those things I love: crumbling ruins, strange Victorian devices, and unknowable supernatural forces,â€ said cocreator Mike Mignola. â€œThese are the very same elements that went into the creation of Hellboy, but here hammered into different shape and relocated to New York City. Hellboy is Joeâ€™s country cousin.â€

The deluxe limited-edition collection features multiple illustrations by Hellboy artist Mike Mignola, as well as a signature plate signed by both Mignola and Golden, and is presented in a handsome slipcase. Additionally, only the Dark Horse edition will feature the previously unpublished story â€œJoe Golem and the Copper Girl.â€

The deluxe hardcover edition of Joe Golem and the Drowning City will be released in an extremely limited edition of only 1,000 copies on September 26, and will retail for $99.99.

The CM Punk Situation: It’s Not What It Looks Like

It's never what it looks like in professional wrestling. OK, maybe it is. Certainly, many twists can be seen coming,...