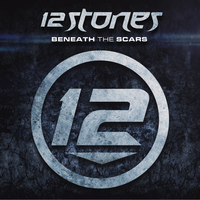 To get fans ready for the May 22 release of their fourth album, BENEATH THE SCARS (Executive Music Group label via Fontana/Universal), 12 STONES is hitting the road with Saliva and Royal Bliss starting April 18 in West Springfield, VA.

For BENEATH THE SCARS, the New Orleans band joined forces, once again, with producer Skidd Mills (Saving Abel, Skillet, Saliva), who had previously worked with 12 STONES on 2007â€™s ANTHEM FOR THE UNDERDOG. The first single, â€œInfected,â€ mixed by Johnny K (3 Doors Down, Disturbed, Staind), is spinning on Active Rock stations nationwide and is available for download on iTunes and Amazon. Fans who pre-order the album from bandâ€™s official website (www.12stones.com) will have early download access to six songs. The rest of the album will then be made available on May 22.

A lyric video for â€œInfectedâ€ can be seen here: http://bit.ly/A5Jv2y. As singer Paul McCoy explains, â€œThe song was written about the messed up state of the world. It speaks about how crazy these times are, and about being fed up with the chaos and hatred.â€

Check out 12 STONES at any of the following stops, with more dates being added in the coming days. Fans should check any of the bandâ€™s websites for updated information.

With Saliva and Royal Bliss: