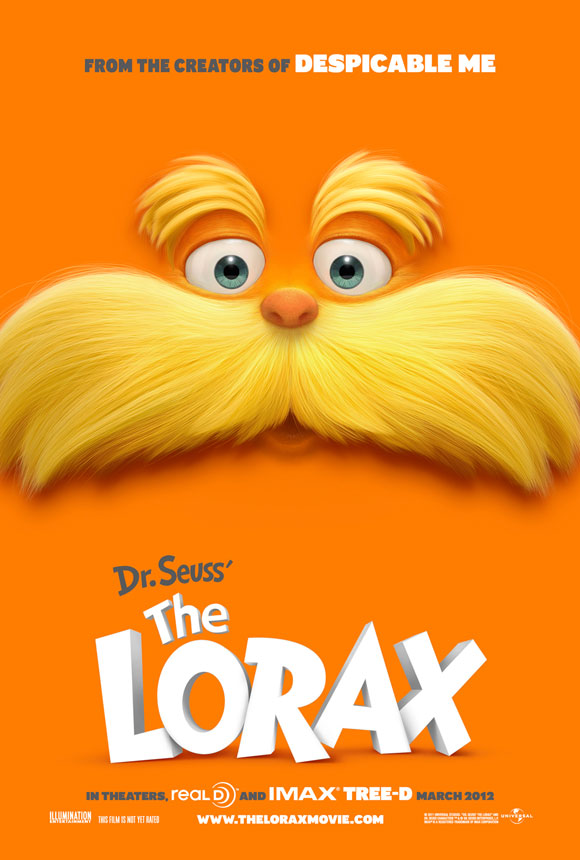 The first children’s book by Dr. Seuss was published 75 years ago. Spanning and permeating through over three generations, despite nonsensical verbiage, Dr. Seuss books are as relevant and magical as the day they were penned. What is great about them is their ability to drive home important morals while still being fun and entertaining.

The Lorax will likely get a lot of negative press from those who are looking too deep into a kid’s flick– what with its 70+ product tie-ins and characters invented or changed. And, of course, endorsing a car was probably not the smartest choice for a story whose main message is anti-industrial. But modern times call for modern storytelling- and the problem with staying true to a Seuss book is that it will end up lasting twenty minutes.

Inventing the lovestruck, sudden-environmentalist Ted and his tree-hugging object of affection is indeed egregious to a Seuss purist. Showing the Once-ler’s slow, sad decline into greed was not at all part of the classic, nor was he ever actually shown. You could wag fingers, raising the point that the Once-ler’s family isn’t introduced until after he becomes successful. You could say that the villainous O’Hare was excessive. You might even want to argue that throwing in Betty White was just an attempt at cashing in on her Midas touch effect. But let’s take away all the frills and updates that people are complaining are sullying the true message of the film. Is that the case?

No. That is a load of crap. Don’t worry, it’s fair trade certified, locally harvested organic crap. The point of The Lorax is to teach children environmentalism. And The Lorax, despite any deviations from the text, does just that. It fosters the sense that overproduction and wasting natural resources is a very bad thing to do. It teaches children the value and function of trees. And it does it in the brightly colored, slightly bizarre, fun Seuss style that we grew up with. Good movies need character development. You are not going to get 90 minutes out of one character reminiscing. You won’t hold children’s attention without some humming fish, musical numbers or some plot twists here and there.

High School Musical veteran Zac Efron and girl interrupted Taylor Swift did decent jobs of giving motivation for the nameless original character, now dubbed Ted. While it is never really explained how Audrey (Swift) finds out about Truffula trees in the first place, her enthusiasm is parallel to your run of the mill green queen. Their relationship seems very one-sided for much of the film, but feigning interest for love is something children and adults alike understand or will encounter.

Ed Helms as the Once-ler is given depth as well, and we are given a much more plausible backstory as to why he is so intent on decimating the Truffula tree population. Living up to your family’s expectations is something almost everyone can relate to. The Once-ler’s story comes full circle, which provides a great message to children: you CAN bounce back from mistakes.

The Once-ler’s family are self-serving and demeaning, not unlike Rob Riggle’s character: the mayor of Thneedville and CEO of O’Hare Air. Poking fun at our dependency on bottled water, but taking it to a new level, The Lorax film really tries to cover as many bases as they can with their impressionable audience. Betty White remains the sassy, intrepid badass grandma that we all know and love while Jenny Slate’s Mrs. Wiggins was maternal, borderline-aggravating yet delightful. Just like your own mum. While the Once-ler’s dysfunctional family is dreadful and unlikeable, the Wiggins’ are just eccentric and lovable.

And Danny Devito is, if nothing else, the perfect embodiment of a small furry guy who provides comic relief as well as comfort.

Is it a kid’s movie? Yes. Is it smart, entertaining and fun enough for adults? Absolutely. Is it a line by line retelling of a Dr. Seuss book? No. But it can’t be. So what is it? It is a fun, informative flick that drives home a very important message: Unless someone like you cares a whole awful lot, nothing is going to get better. It’s not.