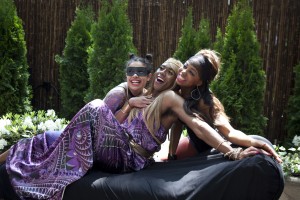 Four star-crossed lovers, a titillating group of fairies, a queen in drag, craftsmen who become cross-dressing fairies, and fornicating shadow puppets. Add to that some strobe lights and dance music and you’ve got yourself a rather contemporary and very adult version of Shakespeare’s “A Midsummer Night’s Dream.” The Hive’s “A Midsummer Night’s Queer Dream” is a unique adaptation of this Shakespearean farce, but most of all, it is wickedly good fun.

This play is not a gay production. Take from it what you want, but this show is less of a political statement and more a story about love and the obstacles we face in order to obtain it. The four lovers just happen to be both a gay and a lesbian couple, but no matter hetero or homosexual, the lovers are relatable to us all. Rejection, deception, betrayal, trickery and debauchery are all present in this manipulated game of love.

“Ay me, for aught that I could ever read, could ever hear by tale or history, the course of true love never did run smooth. . . .”
They aren’t kidding when it comes to this story.

Hermia and Lysander, have fallen in love, but Hermia’s father, Egeus, has chosen Demetrius for her. Demetrius loves Hermia who won’t return his love, but Helena loves him deeply. The drama ensues when Egeus seeks help from Theseus, the Duke of Athens, who forces Hermia to either choose marrying Demetrius, life in a convent, or death. Hermia, finding none of these choices appealing, defiantly escapes into the forest with Lysander, but not far behind them is Demetrius and Helena.

These four couldn’t pick a worse time to be in the forest, as Oberon and Titania, the king and queen of fairies are quarreling over a young Indian boy she has adopted. In order to lure the boy away, Oberon deviously plans for Puck, his servant, to place magic drops over Titania’s eyelids as she sleeps, which will make her fall in love with the first one she sees when she awakes. This will keep her busy enough for him to take the boy. Oberon also instructs Puck to do the same for Demetrius whom he hears denouncing Helena and takes pity on. Unfortunately, Puck accidentally foils the plan and mixes up the lovers and creates yet another conflict. In the midst of this chaos, a group of craftsmen enter the forest to rehearse a play for the Duke’s wedding. All of these characters become entangled in a web of trickery which is exploited by Oberon.

As the story continues, momentum builds and the plot begins to climax. The actors do a superb job with the meager space provided, and some are even quite outstanding. Michael Raver gave an explosive performance as Helena. His raw and emotional portrayal gave us full access to the vulnerability of his character and her pitiful desperation for love. Kyle Haggerty was charismatic in his portrayal of the craftsman Bottom and most amusing to watch as his head was transformed into that of an ass. Well played and equally enjoyable were Samuel T. Gaines and his counterpart, Megan Grace O’Leary. Gaines began his role as Theseus, Duke of Athens and later portrayed Titania, the Queen of Fairies in drag. O’Leary, began her role as Hippolyta, Queen of the Amazons and later became Oberon, King of the Fairies. Both gave impressive performances.

“If we shadows have offended, Think but this, and all is mended, That you have but slumber’d here, While these visions did appear.”

With so many productions of Shakespeare steadily being performed, it is extremely difficult for any company to truly stand out, but the Hive manages to do just that and more. Their adaptation of one of Shakespeare’s most popular works, is electric, erotic, hilarious, and plenty thought-provoking. The Hive crosses boundaries with its gender switching of characters, giving the show a more contemporary and edgy feel, and making it more appealing to a larger, more universal audience. If you are not a big fan of Shakespeare, you will be by the end of this show. This is a deliciously wild adventure.

About Marisa Vitolo 14 Articles
Marisa Vitolo is a contributing writer for the theatre review section. "There's no better job than getting paid to go to the theatre and write about it." Her love of theatre started when she was a young girl and she saw her first Broadway show, "Annie." Coming from a background of artists; one uncle was a painter and designer, another was an Off Broadway actor and singer with the Metropolitan Opera House, and her dad dabbled in the cabaret circuit, Marisa has always been surrounded by art and culture and has a great appreciation for all aspects of it. She even attended NYC's prestigious Fashion Institute of Technology for a short time studying fashion design. She has dabbled in music, playing the saxophone in high school, and later moving on to guitar, which she admits she is still a novice at. She is also an avid sports fan and loves to read books, listen to music, but most of all, backpack around the globe.