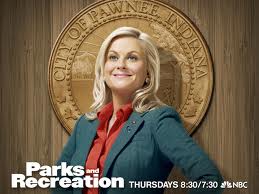 After a season spent running madly between countless spinning plates, â€œParks and Recreationâ€ finds a way to achieve some balance. While â€œLuckyâ€ may have been the best episode of the fourth season, â€œBus Tourâ€ spins true enough to stand forever, right along with classics like â€œTelethon,â€ â€œHarvest Festival,â€ and â€œLâ€™il Sebastian.â€ This is the old magic.

A few things we know this season: Leslie wants to be a Pawnee City Councilwoman. Chris Traeger is crumbling under the weight of a yearâ€™s worth of romantic disappointment. Bobby Newport is an over-privileged twit who wants to buy the election. Jennifer Barkley is amiably amoral and doesnâ€™t much care about anything. April would like to believe sheâ€™s as cruel as Jennifer, but much to her own annoyance canâ€™t help caring about those in need.

It finds a way to develop all of these ideas, and throw in dashes of the characters we know and loveâ€”Ron, Tom, Andy, Chris, Donna, and even Jerryâ€”and do all of this in service on one major plotline. Tomâ€™s bad business ideas are funny without feeling repetitive, Donna is feisty without seeming cruel, Ron Swanson is stoic without seeming opaque, and Andy is Burt effing Macklin.

This episode is a triumph of the â€œParks and Recreationâ€ Formula. The Formula is simple: take the type of bland civic event that happens over and over again throughout America. Show the earnest effort that goes into each detail. Be honest about the ultimately piddling nature of said event. Refuse to say it is not necessary. Toss in a healthy portion of quirk. Serve each Thursday night.

â€œBus Tourâ€ presents this difference between the two shows clearly and concisely. It is a success on all levels, a welcome one for anybody wondering if the show could do it anymore. Everything is not hunky-doryâ€”Chris remains depressed and lonely, everybody still hates Jerry, and Leslie is not guaranteed a winâ€”but people gain fulfillment from trying, and receive something besides mockery and hopelessness in return. What a neat trick.

About Justin Mitchell 48 Articles
Justin Mitchell is a freelance multi-media journalist and writer working in New York. In addition to his work at Review Fix, Justin has written for Latitude News, The New York Daily News, and Feet in 2 Worlds. Follow him on twitter: @mittinjuschell