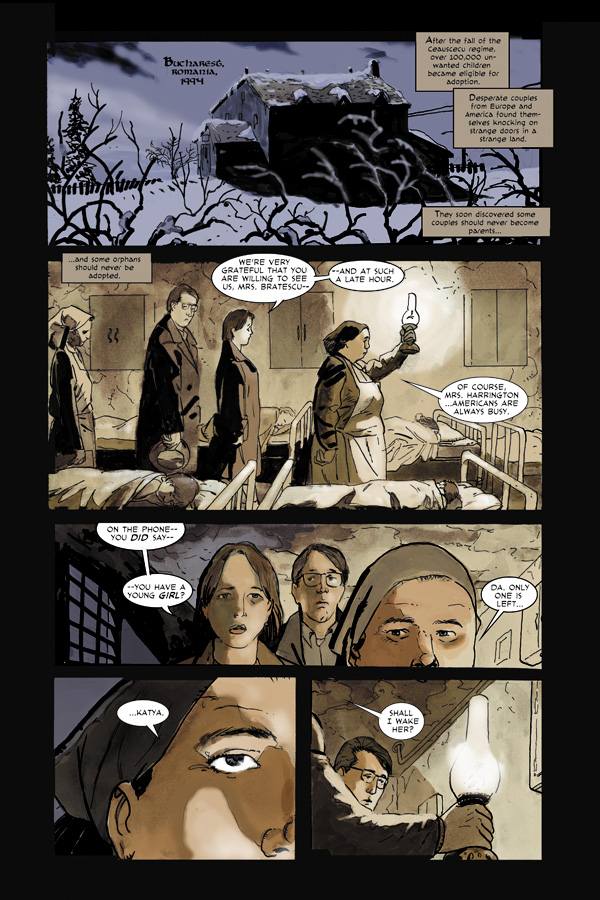 Dark Horse Comics recently announced the Riven graphic novel, the third collaboration between co-writers Bo Hampton (The Legend of Sleepy Hollow) and Robert Tinnell (The Wicked West), which is slated to hit stores August 22. Rivenâ€™s three-part story beginning in Dark Horse Presents #14 will serve as a chilling introduction to their world of terror.

â€œDark Horse Presents is bringing together such a great mix of talent and stories at the moment that itâ€™s honestly an honor to be included in the book. From all the chatter Dark Horse Presents has been generating itâ€™s clear the book is appealing to discerning, articulate readersâ€”and those are precisely the sorts of people we hope are attracted to Riven,â€ said Robert Tinnell.

Rivenâ€™s Katya has been in a coma for five years, and when she awakes, everything has changed. Now she is a gorgeous teenager with a mysterious, gruesome past, becoming aware of a growing, terrifying power inside her body, triggered by the touch of the full moon, eager to break free . . . Can Katya solve the mystery of her blood-drenched nightmares before they become reality?
â€œIt was a great spawning ground in its original incarnation and Iâ€™m really happy to be part of Dark Horse Presents now. Iâ€™m looking forward to seeing the Riven pages in that format,â€ Bo Hampton added.

Check out Riven in Dark Horse Presents #14, on sale July 18!

Since 1986, Dark Horse Comics has proven to be a solid example of how integrity and innovation can help broaden a unique storytelling medium and establish a small, homegrown company as an industry giant. The company is known for the progressive and creator-friendly atmosphere it provides for writers and artists. In addition to publishing comics from top talent like Frank Miller, Mike Mignola, Neil Gaiman, Gerard Way, Will Eisner, and best-selling prose author Janet Evanovich, Dark Horse has developed such successful characters as the Mask, Timecop, and the Occultist. Additionally, its highly successful line of comics and products based on popular properties includes Star Wars, Avatar: The Last Airbender, Buffy the Vampire Slayer, Aliens, Conan the Barbarian, Mass Effect, Serenity, and Domo. Today, Dark Horse Comics is the largest independent comic-book publisher in the United States and is recognized as both an innovator in the cause of creator rights and the comics industryâ€™s leading publisher of licensed material.