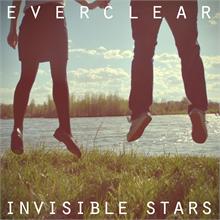 Known for their past big hits like â€œSanta Monicaâ€ and â€œFather of Mine,â€ Everclear, the alternative outfit from Portland, Oregon, have definitely seen their share of fame since their formation in 1992.

Itâ€™s been three years since their last album, â€œIn A Different Light,â€ but their newest release, â€œInvisible Starsâ€ proves that they have still got it now as much as they did back then.

Everclear are current Co-Headliners on this yearâ€™s Summerland Tour, along with Sugar Ray, Lit, Gin Blossoms and Marcy Playground.

â€œInvisible Starsâ€ manages to capture everything that makes Everclear well, Everclear. They pick up right where they left off with their last album, yet still spin a bit of a different sound. Itâ€™s very mellow, but it still works.

The key word is â€œcurrent,â€ as this is the bandâ€™s fourth different full lineup. 50 year-old lead singer Alexakis remains the only original member in the group.

You wouldnâ€™t be able to tell that there have been so many lineup changes, as Alexakis pretty much leads the show and keeps the very essence of the band intact. Despite his age, his voice is still as prominent as it was back then.

The albumâ€™s lead single, â€œBe Careful What You Ask Forâ€ is the perfect representation of this album and where the band finds itself today. Itâ€™s a keyboard-happy, feel-good rocker, with the catchiness and bold lyricism that showcases Everclear at its best, where no other band can touch them in that category.

There is a great flow to this album as tracks transition pretty flawlessly. Every track at least offers something different.

A couple of high points in the album, like tracks â€œFalling in a Good Wayâ€ and â€œAces,â€ serve a fast-paced tempo peppered with crunchy riffs reminiscent of todayâ€™s pop-punk. Itâ€™s easy to defer that many bands drew their influences from Everclear with this song.

â€œJackie Robinsonâ€ features a unique piano intro that fittingly sounds like it came straight out of the 1940â€™s. The lyrics tell a great story as well, it stands out the most on the album.

The rest of the album, while not terrible, doesnâ€™t exactly stand out either. The songs are sort of just there and it feels as if the band has been there and done that before in some way on previous albums. Some examples of this are the tracks â€œVolcano,â€ â€œSanta Ana Windâ€ and â€œWishing.â€

But donâ€™t let that discourage you.

What makes this album are in fact, the lyrics to most of the songs, as they bleed out much emotion and tell great stories. That is also what has made Everclear so different from the rest of the alternative pack.

With â€œInvisible Stars,â€ itâ€™s clear that Everclear is back in full-force now and are not to be messed with.