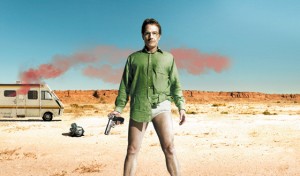 Just when it’s safe to think that Walt and Jesse couldnâ€™t descend any further into the criminal underworld, they decide to add a train heist to their repertoire.

With the help of Lydia, the duo, along with Mike learn of a train transporting the highly coveted yet scarce methyl-amine. The plan unfolds in the desert as the train is brought to a halt due to a conveniently broken down truck blocking the track. As the train conductors ask about the situation, Jesse and members of the crew covertly overtake the train, attaching a hose to extract the substance while Walt monitors the amount being pumped into an underground storage container. The plan initially appears to be going off without a hitch until a good Samaritan comes along and uses his vehicle to push the truck off of the track, compromising the amount of time available to the crew to complete the heist.

In the most suspenseful scene of the episode the men scramble to complete their mission. While Mike suggests to Walt that the crew abort the operation, Walt insists continuing until the very last second and until the container is filled to capacity. With seconds to spare until the the container is filled, the valve on the train is shut and the train is started. The problem lies in the fact that Todd, a member of the crew is still hanging on a ladder on the side of the train, while Jesse is positioned underneath the train. As the speed of the train starts to increase, Todd uses his only option to jump onto the tough desert terrain. In order to avoid being crushed and mangled alive, a frightened but quick thinking Jesse lies flat on the track as the train slowly creeps away a few inches above him. The crewâ€™s celebration is cut short when they notice that a boy witnessed the entire incident. As the boy nervously waves to the group, Todd waves back, pulls a gun from his waistband, and kills him despite Jesse adamantly voicing his disapproval.

Overall the scene and the plot of the episode were fast paced, exciting, and far from dull like the magnet plot of the season premiere. As the clock wound down for them to complete the heist, one could easily imagine that viewers were on the edge of their seats waiting to see if Jesse would make it out alive. Watching the entire episode was like watching a blockbuster movie condensed into an hour primetime thriller.

Walt and the crew were reminiscent of old school western gangsters, eager to sink to a new low chasing cash. The episode revealed that there are many cracks in the foundation of the meth operation. The differences in principles among the men foreshadows that discord will arise among them. The group has yet to come to a consensus on what behavior is tolerable; for some killing anyone that threatens the operation is more than acceptable, this conflicts with Jesse who believes that they are in the meth business to make money, he did not intend on being in the business of murder.

Jesse appears to be the only member of the operation with a heart. He discourages Walt and Mike from killing Lydia and is the most appalled by Todd shooting an innocent child to death. While money initially influenced him to be a part of the meth business, unlike Walt and Mike he is unwilling to do it at any cost. He seems to be the only one who doesnâ€™t take the act of taking someoneâ€™s life casually. Jesse has evolved into the operationâ€™s moral voice of reason, though the character started out as a typical street punk, he has grown more mature and thoughtful about how his behavior impacts others