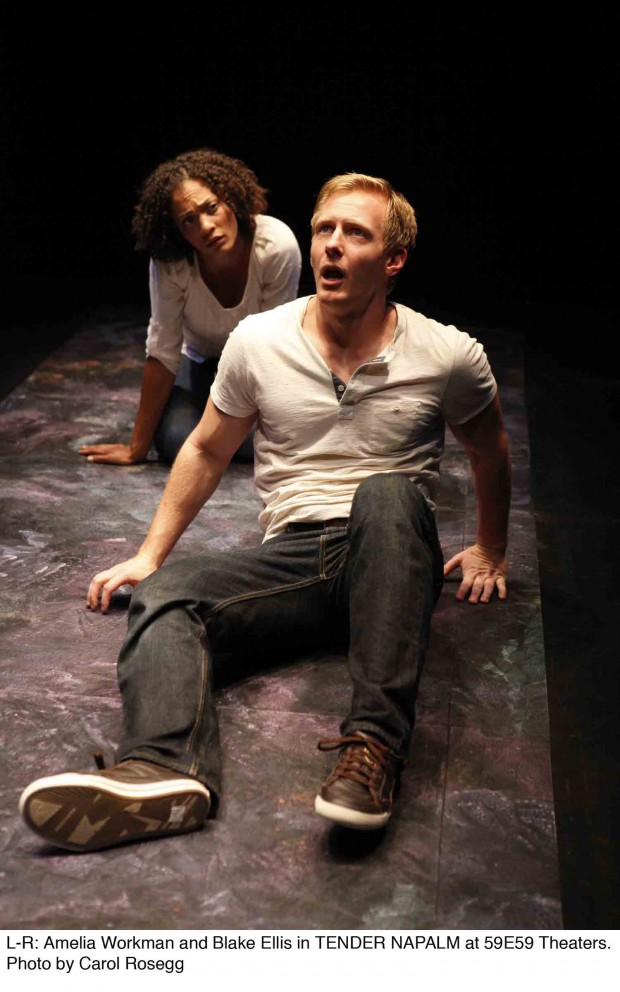 When life presents its every day challenges, we may go to different lengths to figure things out and make sense of it all. You may be left confused, delirious and resort to personalized ways to cope.

This sentiment is addressed by â€œTender Napalm,â€ as the two main characters try to pick up the pieces of their broken family by speaking through metaphors.

This show is a unique play that is ultimately an acquired taste. Not everyone will be in a favor of this play due to its heavy symbolic language. If the viewer stays with the story though, they can be in for a real treat.

The beginning of the play was great. You were able to see the underlying passion between the couple. As the play goes on though, the craziness begins. There are strange metaphors and constant shifting between time periods. The play could be compared to a puzzle. If you find yourself not focused on the dialogue, you could spend half the time just trying to dissect which time period the story is in.

Starring Blake Ellis and Amelia Workman as Man and Woman, â€œTender Napalmâ€ is full of raw emotion, but has plenty of gentle moments. The story is about a couple that uses symbols and allegory to recount the memories of their relationship. They discuss everything from the first time they met to the current struggles they must face together after the loss of their child. The supernatural symbols such as monkeys, serpents and grenades make the story weird and even hard to keep up with at times.

Also, the traverse stage, similar to those seen in fashion shows, makes it a tad difficult to focus on both actors when they are at opposite ends of the stage.

When Ellis and Workman are together though, they show an undeniably passionate chemistry. The upside of the traverse stage is that it allows you to watch the actors extremely up close. You can see the veins that pulse in their necks, the beads of sweat on their foreheads and the spit that flies from their mouth as they recite their lines. Although the stage is small, they both make full use of it. They dance together, follow one another and jump all around it.

The show is entirely too verbose with its extremely long-winded monologues within the hour and a half that it encompasses. However, when one of the actors speaks, the other remains fully engaged in what is being said. They are both attentive and focused on each otherâ€™s words. It makes you wonder not only how these two actors can memorize all of this dialogue, but how they can keep a straight face during some of the more sexually explicit scenes. In fact, from a realistic perspective, the dialogue where the characters speak about their families and the playfulness of their relationship is far more enjoyable than the silly metaphors used.

Ultimately, â€œTender Napalmâ€ is cast quite well. Both actors fit the roles they play and work hard to bring this strange story to life. More set pieces would have been a welcomed addition but the fact that there werenâ€™t any definitely did not hurt the show. The minimal lighting also enables you to focus on their words and not any side distractions. Youâ€™re instantly grabbed by the couple’s affection for one another. This starts from the very first lines of the play with the manâ€™s analysis of the womanâ€™s mouth. The way they describe each other’s body is flirty, yet intricately descriptive.

Despite the wordy dialogue, the story of â€œTender Napalmâ€ is eloquently written. The audience is captured not by glittery sets, advanced lighting or fancy props though. Instead, they are taken into the story by just two people, a stage and their strange words and fantasies.

To mark the 20th anniversary of "NHL 94," Electronic Arts announced on their official site today that an "Anniversary Mode"...