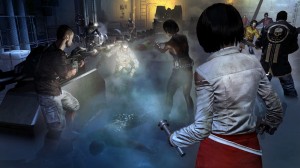 Starting today, gamers will be able to pre-order Dead Island Riptide in-stores and online at GameStop, Amazon.com and Best Buy and receive an extremely limited edition Steelbook as a preorder incentive. These beautiful Steelbooks will be available at time of game purchase at GameStop, Amazon.com and at Best Buy for those who preorder early. Quantities of these Steelbooks are extremely limited and only available on a first come first served basis while supplies last. Additional preorder incentives are expected to be announced later this year.

Dead Island Riptide is currently planned for a 2013 release on Xbox 360, PlayStation 3 and Windows PC.

For more information, visit one of the following official Dead Island portals:

The survivors of Banoi thought they had escaped the terrors of the tropical island and survived the apocalypse on a corrupted paradise. Then their fate took a turn for the worseâ€¦

Deep Silver develops and publishes interactive games for all platforms, seeking to deliver top-quality products that provide immersive game experiences driven by the desires of the gaming community. The company has published more than 100 games worldwide since 2003 including the #1 best-selling zombie action thriller, Dead Islandâ„¢. Deep Silver, Inc. is a wholly-owned subsidiary of Koch Media, GmbH. For more information, please visit www.deepsilver.com.

Techland is a leading Polish developer, publisher and distributor of PC and console games since 1991. Its proprietary Chrome Engine 5 technology is among the world’s most advanced game engines, with full X360, PC and PlayStationÂ®3 system compatibility. With a staff of nearly 200 specialists in two development offices in Wroclaw and Warsaw, Techland is committed to delivering top-quality titles for worldwide markets. Currently the company is working on several high-profile titles for consoles and PCs.