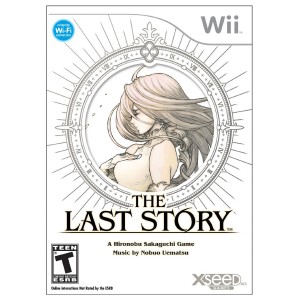 The second game to be released in America because of â€˜Operation Rainfall,â€ â€œThe Last Storyâ€ has finally hit shelves after multiple delays and a shipping mishap. What was promised to be a unique RPG by Mistwalker, was this game worth waiting for?

â€œThe Last Storyâ€ puts you in control of Zael and his group of mercenaries as they travel to Lazulis Island to try to fulfill their dream of becoming full-fledged knights. Across the way Zael uncovers a mysterious power that allows him to â€œgatherâ€ enemies around him. He also befriends a strange girl who turns out is much more than who she appears to be and suddenly Zael and his buds are thrust into an adventure that may be more than they can handle.

The story is well-paced with some colorful and well-developed characters (Syrenne and Lowell being two of the more â€œcolorfulâ€ of the bunch) filled with plenty of intrigue and even some backstabbing thrown in for some extra flavor thatâ€™ll keep the player entertained. The only bump in the road is the romantic subplot. This subplot feels a bit forced, trite and throws the flow of the regular story out on a limb and makes the player want to skip these scenes entirely.

The game plays like a mixture of a military squad based action game and an action RPG where you go into battle with a small squad that has their own special abilities and you can give them some basic orders on what to do. You can also use the terrain for cover and even have a crossbow to use when youâ€™re trying to be silent.

The crossbow is a nice idea with multiple arrows to choose from, itâ€™s just that itâ€™s underutilized as is using cover because youâ€™ll be spending most of the battle running up to the opponent and slashing away. That doesnâ€™t mean the battle system is just mindless hack and slash. Zael has other abilities such as diffusing magic circles, a magical gale attack and an attack where he runs up a wall and then slams on a group on enemies.

Boss fights also need a lot more strategy than just slashing away until they die. Each boss has their own unique way of defeating them, making each boss fight different from the last and making these fights the highlight of the battle system.

On the technical side of things itâ€™s a mixed bag. The voice acting provided by the main characters is wonderful; the British accents give each character a unique life thatâ€™ll surprise even the most hardened skeptic. Expect to hear a lot of British slang while playing. However, voices done by some of the non-playable characters range from passable to downright annoying. Graphically, the game looks more like the most well polished and highly-resoluted Playstaton 2 game than a Wii game. Yes, the locations may be grand and Lazulis city may scaled as a Medieval city with tons of people and narrow allays, but it just doesnâ€™t live up to the Wiiâ€™s standardâ€™s. Some characters even look weird in the conversation screen. Most notable is Syrenne who looks like Chucky from â€œChildâ€™s Play.â€

Online play consists of Deathmatch and Co-op play. Deathmatch has is where you and up to five people compete against each other where whoever has the points at the end of a time limit wins and Co-op is you and up to five people team up to fight a boss found in the game. You are alsoÂ given a rank based on how well you do in each mode. These are nice distractions from the main game as long as you remember that that character you choose will have the same stats and equipment as your character in the main game.

In all, â€œThe Last Storyâ€ has an intriguing story and a battle system that requires strategy more than random slashing. The graphics may not be up to standards but that should not deter anyone.