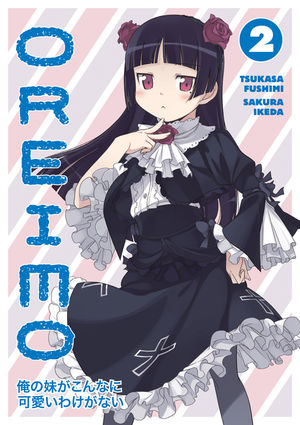 â€œOreimoâ€ is one of the most popular underground animes in recent years with the complete season DVD having been rereleased and sold out already. With the manga finally out in America, volume two is a massive improvement over volume one.

In this volume, Kirinioâ€™s dad finds one of Kirinoâ€™s eroge DVDs and starts to suspect that her daughter is an otaku. Now Kyosuke has to stick up for her. Also, Kirino has friends coming over and tells Kyosuke to not leave his room or else. Of course, hijinks ensue.

The events of this volume are much more interesting and are better written than the previous volume. Here, there is a huge conflict that could break apart a family and possibly a personâ€™s social status. The way Kyosuke stands up for Kirino really shows how dedicated and how much his relationship with his sister has grown in the series. Heâ€™s willing to stand up to his dad which is something he would never have done before. That right there is character development.

The second major plot with the friends is also well-written and downright hilarious. Itâ€™s your classic sitcom misunderstanding angle done up to eleven. If you donâ€™t crack even a smile during this story line there is something wrong with you.

Another positive thing is, unlike the last volume, the â€œbig brother/little sister loveâ€ angle has taken a back seat to some good old fashion character development and comedy. It made this volume much stronger than the last one.

The art is still as good as the last volume and it really helps you in during both the dramatic and funny parts. Ikeda san has put in the effort to make sure the characters facial expressions show off their feeling wonderfully and has the funny scenes wouldnâ€™t be as funny if she didnâ€™t put those classic anime funny facial expressions. She also made that â€œyou donâ€™t understand; I caught you so wouldnâ€™t get hurt. I didnâ€™t expect your clothes to come offâ€ bit weâ€™ve seen tons of time funny.

Between the improved writing and structure, â€œOreimo Volume 2â€ is a much better than the previous volume. The story and characters show significant development, the â€œbig brother/little sister loveâ€ angle is downplayed just enoughand the humor and drama is improving.