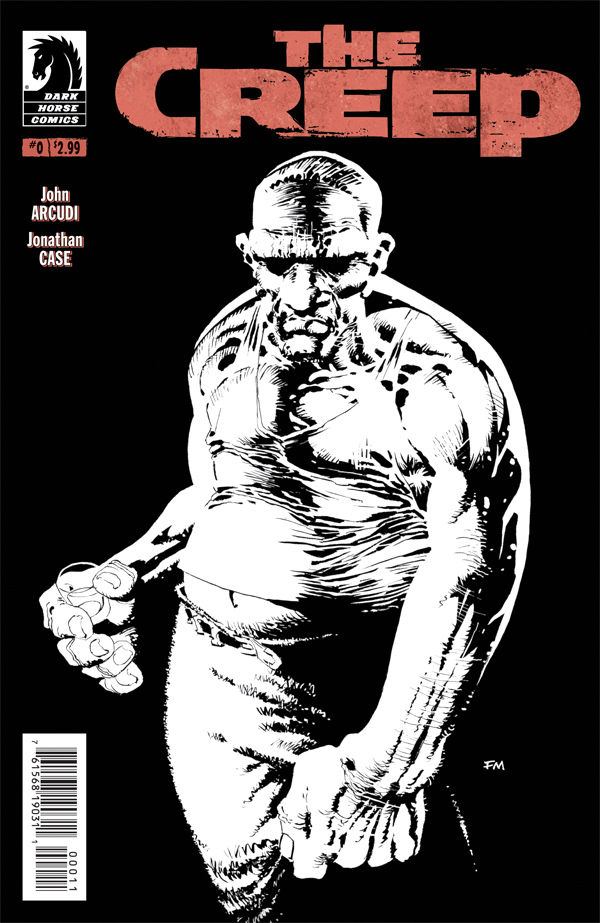 Oxelâ€™s life is a sad one of loss- of love, of dignity and even hope. A chance reconnection with an old flame changes his life and brings the ill desk jockey turned private investigator into a world of pain even he failed to know.

John Arcudi and Jonathan Caseâ€™s thriller â€œThe Creepâ€ is a comic book that screams old-school noir in the vein of James Cain and Frank Miller. He’s a man whoâ€™s only escape from a world of despair is to give closure to those who need it even more than he does. Can you get any more noir than that?

The writing of Arcudi brings Oxelâ€™s life of quiet desperation into full focus. A fantastic detective, with a huge heart, matched only by the size of his deformed frame, Oxel is a character for the ages. The stunning pictorials of Case bring Oxel to life and the journey quickly goes from its pages to a place in your mind not easily forgotten.

In terms of comic books, â€œThe Creepâ€ is a masterpiece, a tale of noir crafted around a mysterious series of suicides and a man who must solve the case before he can find closure from a lost love. In terms of literacy presence, â€œThe Creepâ€ is a prime example of how some comic books can transcend the genre. No super heroes. Not even a super man. Oxel is just a man. This is just a story. But itâ€™s enough to make you a fan of the medium for life.

â€œThe Creepâ€ finds its way into the chambers of your heart by capturing Oxelâ€™s daily plight. Suffering from Acromegaly, his body refuses to stop growing. Visually, Oxel is a combination of former Washington Bullets center Gheorghe Muresan and the late WWF legend Andre the Giant. That, for lack of a better term, means heâ€™s huge. Caseâ€™s ability to show the meagerness of Oxelâ€™s life, the depth of his heart and his abundance in size is just as difficult as Arcudiâ€™s task of telling the story. But they both find common ground in their approach.

Through the use of somber, dark tones, Case invites us into Oxelâ€™s world. Despite the level of listless despair, you wonâ€™t want to leave. Arcudiâ€™s crafting of the tale through the use of heartfelt conversational language makes â€œThe Creepâ€ anything but simplistic and conventional.

It is one of a kind.