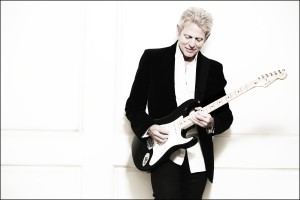 Speaking with Sterling Whitaker at Ultimateclassirock.com about the track, â€œthere were a couple of songs on the album, including â€˜Wash Away,â€™ that I had built the track pretty much top to bottom and there was a couple of areas where I needed some lyrical help and I said, â€˜Iâ€™ll just see if Tommy (Shaw) is in town. Iâ€™ll just have him come over and listen to this and see if anything bounces off of him.â€™ He listened to it and loved it and we sat and wrote lyrics together that day for that song. And then he came back the next day and I said, â€˜Well, youâ€™ve got to sing some of these parts while youâ€™re here,â€™ because he was getting ready to go back out on the road with Styx. So we set up a mic in my studio and he sang some of the harmonies on a couple of songs, â€˜Wash Awayâ€™ and â€˜Heal Me.â€™â€

As Tommy Shaw continues, â€œThe best songs to write are the ones that just roll out of you and you look back and wonder, â€˜Where’d that come from?â€™ That’s what it was like working with DON. There was a natural chemistry there.â€

Many of FELDERâ€™s fans tuned in to Showtime earlier this month for the premiere of the two-part documentary, “History of the Eagles.” He spoke with Billboard.comâ€™s Gary Graff soon after it aired, saying he thought it was a bit incomplete. “Overall I thought it was OK, but I didn’t think it was really an accurate documentary…I thought a lot was omitted from the documentary. There were a lot of things that weren’t discussed, a lot of issues that aren’t brought to the forefront. It glorified (Don) Henley and (Glenn) Frey’s work, giving very little credit to all the other people who had worked so hard on the recordings — including Bernie (Leadon), Randy (Meisner), myself, the other things people brought to the table like (producer) Bill Szymczyk. It was a large team of a lot of people working together to make it happen, and I don’t think that’s really reflected in there.” As for the depiction of his dismissal in part two, FELDER says he was surprised by “the anger that was displayed, and the bitterness, especially from Glenn. It really left me taken aback that he was still so angry about all of that, and I couldn’t understand why, to tell the truth. I’ve been way past it for about 10 years now.”

On a lighter note, he told Billboard.com: â€œI’d forgotten how skinny I was, and I thought all of our hairstyles were…interesting, Henley with his ‘fro and everything. It was just fun to look back at those times.” And he is satisfied that the film captures the musical essence of the Eagles. “Here’s a huge rock ‘n’ roll band on stage with ripped jeans and plaid shirts, as far from the mega shows you see today as you can get,” he says. “You look back and realize that what came across was nothing except five guys standing on stage, playing and singing songs. That’s really what it was all about.”

DON FELDER is continuing to tour all over the U.S. to promote ROAD TO FOREVER (dates to be announced shortly). On April 13, heâ€™ll be performing as part of a very special show for his buddy Stephen Stills and wife Kristen. Their â€œLight Up The Blues Concert â€“ An Evening of Music to Benefit Autism Speaksâ€ (the worldâ€™s leading autism science and advocacy organization) will be held at Club Nokia in Los Angeles, CA along with Crosby, Stills & Nash (CSN), Ryan Adams, Rickie Lee Jones, Lucinda Williams, Chris Stills and other surprise guests. The fundraiser–emceed by Jack Black–spotlights â€œLight It Up Blue,â€ Autism Speaksâ€™ annual global awareness and fundraising campaign celebrated by the international Autism community during World Autism Awareness Day and throughout Autism Awareness Month in April. VIP Preferred Seating Packages for â€œLight Up The Bluesâ€ are on sale now on CSNâ€™s official website (www.crosbystillsnash.com) and www.AXS.com, or charge by phone at 888-9AXS-TIX or 888-929-7849 (applicable fees may apply). Tickets may also be purchased from 10AM-5PM, Mon-Fri, at the STAPLES Center Box Office (1111 S. Figueroa St., 90015), or at the Club Nokia box office (800 W. Olympic Blvd., 90015), open after 5PM on show days. No fees are charged at either box office.

Itâ€™s a marvelous day to have a wedding at the one and only â€œHellâ€™s Kitchen.â€ A perfect day like that...