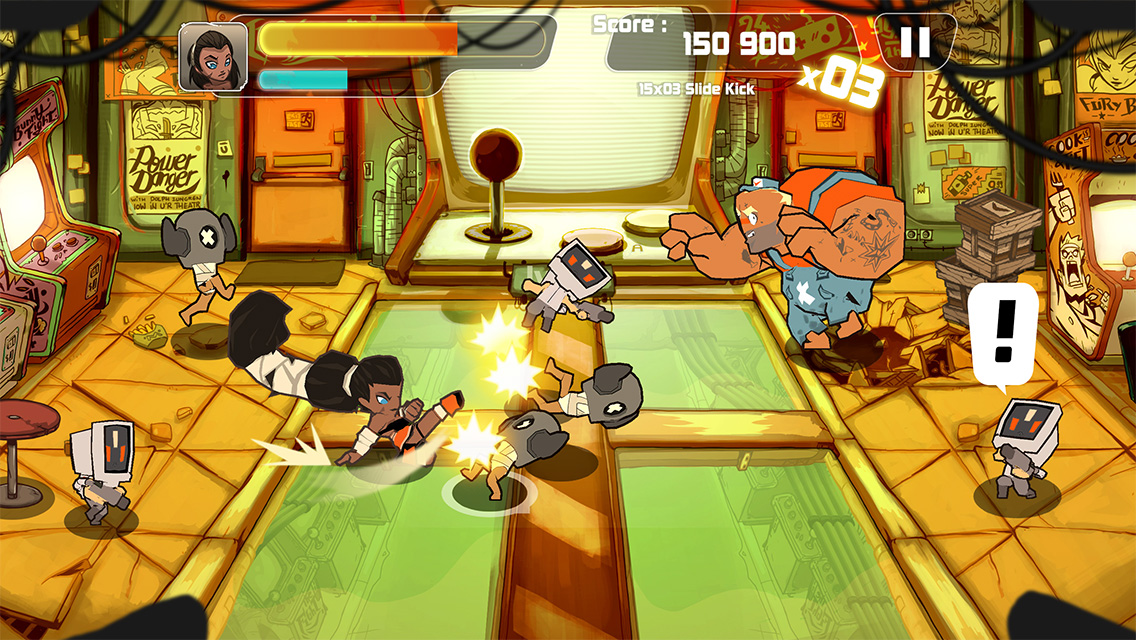 From the makers ofÂ SQUIDS: A modern, old-school brawler with platform agnostic co-op play
Mobile gamers, the fight is on! Indie developers The Game Bakers are revealing their next game:Â Combo Crew, a pocket-sized beat ’em up that combines innovative touch gameplay with good old-fashioned brawling. This action-packed game from the team behind the critically acclaimedÂ SQUIDSÂ andÂ SQUIDS Wild WestÂ will release simultaneously for iOS and Android devices this spring.
InÂ Combo Crew, a trio of heroes face off against hordes of enemies to fight their way to the top of the tower where they’re being held hostage. When one hero falls, another can take over to climb the floors and advance the crew toward freedom. Inspired by the best of the arcade-era brawlers,Â Combo CrewÂ puts a modern spin on classic beat ’em up gameplay with quick play sessions, solo and co-op game modes, a tower level structure, and an endless mode. And it’s the first mobile brawler with cross-platform, asynchronous gameplay, so friends can rescue and revive each other from KO no matter what device they’re using.
“WithÂ Combo Crew, we wanted to bring back the spirit of the old console beat ’em ups — the ones you used to play on the couch with your buddies — in a way that makes sense on modern mobile platforms,” says Emeric Thoa, The Game Bakers’ creative director. “Games likeÂ Street FighterÂ andÂ Final FightÂ require a D-pad controller, and that just doesn’t make sense for touch devices. So we challenged ourselves to make a brawler with really good touch controls. And we’re pretty sure we’ve pulled it off!”
Combo Crew‘s intuitive interface combines highly responsive controls with exciting, tactile gameplay: swipe to attack, tap to counter, and use a two-finger swipe to unleash combo streaks unique to your character’s martial arts skills. When your super combo meter is full you can trigger special moves, racking up massive high scores in the process! See how it all works in the first gameplay video:Â http://youtu.be/-20DW6gTK6EÂ
Upon its release,Â Combo CrewÂ will be available for download from the App Store and Google Play. Leading up to launch day, more details will be revealed atÂ http://www.facebook.com/ComboCrewÂ and @TheGameBakers.
About The Game Bakers
The Game Bakers is an independent video game studio based in Lyon and Montpellier, France. Founded and staffed by industry veterans whose credits include numerous AAA console games, The Game Bakers focuses on creative projects that combine traditional gaming values with the best of the mobile experience. Their turn-based roleplaying seriesÂ SQUIDS, available for iOS, Android, PC, and Mac, has been enjoyed by more than one and a half million players worldwide.Â SQUIDSÂ has also been made into a comic book series and is coming soon to television. Their upcoming brawlerÂ Combo CrewÂ will release for iOS and Android in Q2 2013. To learn more, visit the company’s website atÂ http://thegamebakers.com.