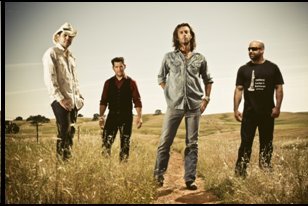 Arizona-based Roger Clyne & The Peacemakers are announcing spring tour dates that take the band down the west coast and up the east coast. Fans can also connect with RCPM at their new monthly live web show, the Cantina-cast, and start making plans for Circus Mexicus XXII, the band-hosted music festival weekend in Mexico this summer.

Starting at The Depot in Salt Lake City, RCPM hits the road (the bandâ€™s endless sweet spot) March 27, headlining great clubs down the west coast, highlighting two special hometown dates in Tempe, then taking high-profile stages out east. â€œThere are countless ways now to share music but still the most enduring, the most meaningful, most powerful, most human, most fun is sharing it live,â€ says Roger.

Circus Mexicus XXII is June 6 â€“ 9 in Rocky Point, Mexico. Now yearly, the beachfront music festival attracts RCPM fans from all over the U.S. (and last year, from seven other countries!). Some call it RCPMâ€™s â€œannual pilgrimageâ€ others call it their â€œcanâ€™t miss long weekend.â€ This yearâ€™s lineup is very special, featuring a reunion of The Refreshments with original members together for the first time in fifteen years. Previous guests include Todd Snider, David Lowery and Johnny Hickman of Cracker, Dead Rock West, Cross Canadian Ragweed, and Eddie Spaghetti from The Supersuckers. While there is a full weekend of events planned, the highlight is always the 3+hour RCPM concert. More info is available at circusmexicus.net with a full media announcement due end of March.

With the goal of continual fan connection, RCPM started a new monthly web series, the Cantina-cast. Broadcasting live on livestream.com (with a â€œstudioâ€ audience), the show features acoustic performances, special musical guests, and the anticipated RCPM banter, much like an old school variety show. Fans can submit requests prior to each cast, so every show is tailored just for the audience. The upcoming March 20 episode will include acoustic duo performances, behind-scenes footage from Rogerâ€™s studio, and a recipe segment featuring Rogerâ€™s Mexican Moonshine tequila brand.

Roger Clyne & The Peacemakers have released six consecutive albums that have debuted in the top 10 on Billboard’s Internet Sales chart, the first independent band to ever accomplish that feat. Two of those albums, 1999’s Honky Tonk Union and 2004’s Â¡Americano!, debuted at #1. That streak of creating timeless rock music continues with RCPM’s most recent studio album, Unida Cantina. In addition to their headline shows, RCPM have opened for Dierks Bentley, John Fogerty, Willie Nelson, Barenaked Ladies, Live, Blues Traveler, Sammy Hagar and Kid Rock, among others.

â€œThe music they play is impure, dirty, raw, immediate and larger than life; yet it comes squarely from its center; itâ€™s timelessâ€¦â€ – All Music Guide

Clyne enjoyed an accomplished stint with The Refreshments, a late-90s rock band whose cult-classic album Fizzy, Fuzzy, Big & Buzzy produced the hit singles Banditos and Down Together. Clyne also wrote and performed the theme song for FOXâ€™s animated hit, â€œKing of The Hill.â€ Also in The Refreshments was RCPMâ€™s drummer, P.H. Naffah. The band is solidly rounded out by Jim Dalton on guitar and Nick Scropos on bass.

All Roger Clyne & The Peacemakers albums are available in stores and online, and all merch can be purchased at peacetimegoods.com.