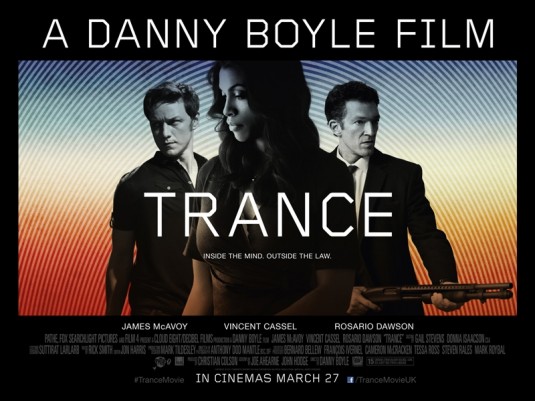 Like many of its kind, a psychological thriller about the inner workings of the mind will please some and confuse others.

â€œTrance,” directed by Danny Boyle, may win its viewers with the suspenseful feel you get from the beginning. However, the movie becomes scrambled and puzzling as time progresses. This makes the first half of the film far superior to the second.

Simon (James McAvoy) works as a painting auctioneer while he is secretly in cahoots with a gang led by the illustrious Franck (Vincent Cassle) McAvoy and his clan plan to steal a Francisco Goya painting worth millions. However, Simon has an agenda of his own and wants to fly solo on this project. Simon suffers a blow to the head at the hands of Franck in a violent altercation and thus cannot recall where he left the sought after painting. To help with Simonâ€™s amnesia, they enlist the help of the alluring and striking hypnotherapist, Elizabeth (Rosario Dawson.)

She eventually joins their team and the plot is crafted.

â€œTranceâ€ is a movie that starts off promising. The first 45 minutes or so undoubtedly pulls viewers in and makes them want to stay with it. While there is no similarity in storyline, â€œTranceâ€ tries to ride the coattails of movies like 2010â€™s â€œInception,â€ butÂ doesn’tÂ quite make the mark.

The film intentionally tries to confuse with the plot twists and turns. Some will enjoy the constant action while it will not be easy for others to dissect and stay with. Although the plot is shaky, the acting is superb. Dawson and Cassle are especially captivating in their scenes together. McAvoy breaks the fourth wall several times in the movie which makes him aÂ likableÂ character despite the numerous skeletons in his closet.

Set to a loud, pounding musical score, the film has all the right tools to please the average viewer â€“ fire, nudity, violence, psychology and sex. This coincides with very strong acting from the main cast, who aid to move along the complex psychological plotline.

While it is enough to get you to watch the film in one sitting, it’s not nary enough to keep you engaged until the end.