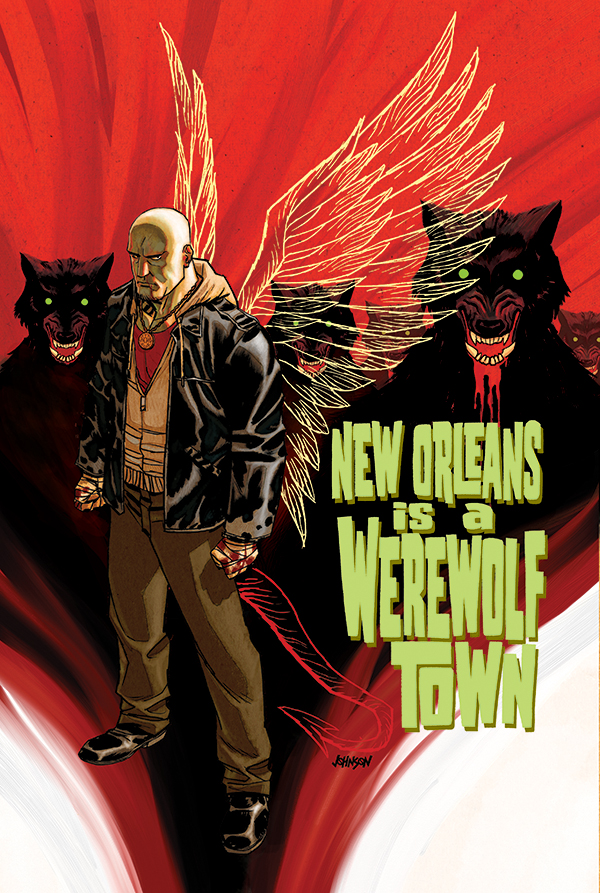 A fantastic tale of dark fantasy with a noir edge.

â€œReaders who crave a mix of horror and action will want to pick up Witch Hunt. Juan is going to murder your face with his art,â€ quipped writer Victor Gischler. â€œIâ€™m just so thrilled with his work, and Dark Horse is the perfect publisher for this project. So much support and enthusiasm. I canâ€™t thank Dark Horse enough, and I canâ€™t wait for this project to hit shelves!â€

Cassian Steele is boss of the werewolf mafia in the Big Easy, and heâ€™s got a problem. The old witch Verona, who knows his secret, has gone into hiding. Cassian wants her dead. So he sends out the word: an open contract. The first monster to dust Verona gets a big payday.

Werewolf mobsters, vampire maids, voodoo wizards, zombie ninjas, and even a rogue priest show up to try to collect the bounty. What they donâ€™t realize is that Barnabus Black, a demon desperately trying to regain his halo, is her protection.

â€œVictor came up with a very interesting story for me to draw. I was able to portray a varied array of weird stuff, which makes the book a really fun ride visually. So if you like werewolves, angels, demons, witches, zombies, ninjas, vampires, etc., you might find something to your liking,â€ added artist Juan Ferreyra.

For more information, check out the exclusive interview with Juan & Victore on Bloody Disgusting!

Witch Hunt #1 is on sale September 18 in comic shops everywhere!

Founded in 1986 by Mike Richardson, Dark Horse Comics has proven to be a solid example of how integrity and innovation can help broaden a unique storytelling medium and establish a small, homegrown company as an industry giant. The company is known for the progressive and creator-friendly atmosphere it provides for writers and artists. In addition to publishing comics from top talent such as Frank Miller, Mike Mignola, Neil Gaiman, Brian Wood, Gerard Way, Felicia Day, and Guillermo del Toro, and comics legends such as Will Eisner, Neal Adams, and Jim Steranko, Dark Horse has developed its own successful properties, including The Mask, Ghost, Timecop, and SpyBoy. Its successful line of comics and products based on popular properties includes Star Wars, Mass Effect, Buffy the Vampire Slayer, Aliens, Conan, Emily the Strange, Tim Burtonâ€™s Tragic Toys for Girls and Boys, Serenity, and Domo. Today Dark Horse Comics is the largest independent comic book publisher in the US and is recognized as one of the worldâ€™s leading publishers of both creator-owned content and licensed comics material.