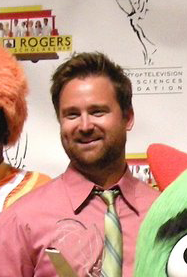 Review Fix chats with The Aquabats! Super Show! co-creator Christian Jacobs, who discusses the upcoming second season of the show, as well as his growing status and a pop culture innovator.

Jacobs is also the lead singer of the band, known better as The MC Bat Commander. A pioneer in American Ska as well as the mind behind another wildly popular kids show, “Yo Gabba Gabba,” Jacobs is one of the most interesting personas in entertainment today.