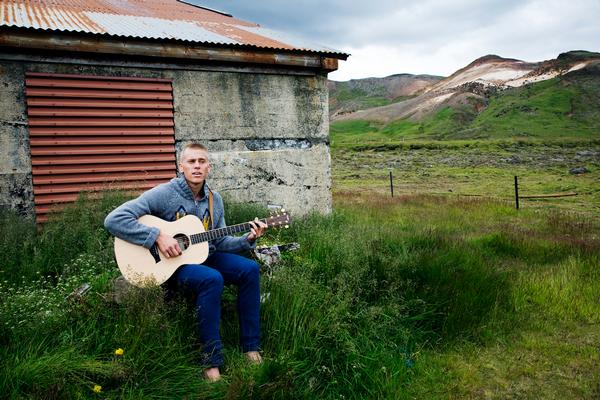 After winning numerous awards and even outselling known artists the likes of Adele and Amy Winehouse on the Icelandic iTunes charts, singer/songwriter JÃ³n JÃ³nsson is finally in America.

A performance for Epic Records chairman and CEO L.A Reid on August 2012 earned him a record deal, which opened up the doors to the American market.

â€œI didnâ€™t believe that I was going to play at his office until the very moment I was in there,â€ JÃ³nsson said. â€œIt was really exciting.â€

Debuting his new single â€œWait for Fateâ€, JÃ³nsson executed a dynamic performance at New York City’s Rockwood Music Hall on April 29. With his guitar in hand, JÃ³nsson delighted his fans with all of his talent and joyful personality.

â€œIt was pretty amazing- it was exciting to see how many people showed up and it was also really cool how [the audience] all participated in the whole show,â€ he said. â€œAt the end, everyone was singing along to pretty much all the songs- I really enjoyed it.â€

Accompanied by his good pal and piano player, Kristjan Bjarnason and surrounded by an eager audience, the 30-year-old â€ demonstrated his passion for music and assuring a promising future/career.

â€œIf I were alone, I would not be doing it,â€ he stated. â€œIâ€™m happy to be both withÂ Kristjan and obviously the other guys as well.â€

Since the debut of â€œWait for Fateâ€ in Iceland, JÃ³nsson was awarded a Gold Record and continues to climb his way to the top of the Icelandic top selling charts. With a remarkable vocal and guitar style, JÃ³nsson has been recently compared to singers John Mayer, Gavin Degraw and Jack Johnson.

â€œThatâ€™s awesome itâ€™s just some people doing that,â€ he said. â€œIâ€™ve seem them in concerts and itâ€™s just an honor for someone to put me in the same category. Hopefully I can open up for them one day.â€

â€œAlways Gonna be Thereâ€ is another one of the tracks included in the album â€œWait for Fate,â€ which was inspired by lifeâ€™s most important components. JÃ³nsson explained that this track was written as he was playing his guitar and singing made up words before it was finally recorded.

â€œThere are some people that I always wanna be there for,â€ he said. â€œItâ€™s just inspired by friendship, love and happiness. I was just singing some made up words not English not Icelandic,â€ he joked.

Having no idea as to when exactly he developed his passion for music, JÃ³nsson explained that he began writing his own music at 10 and how his life changed after a Christmas gift.

â€œI have no idea where that passion came from- It was pretty much always there,â€ JÃ³nsson said. â€œMy brother and I, got a drum kit for Christmas one year so it was no turning back after that- it was just us in the garage,â€ he joked.

JÃ³nssonâ€™s first single in America â€œWait for Fate,” includes a variety of music styles, which include pop, blues and jazz.

Although the albumâ€™s title originated from one of the 12 tracks in the album â€œWait for Fate,â€ JÃ³nsson explained how he came to write that specific song and explained who itâ€™s based upon.

â€œI thought it was a cool name for the album because wait for fate can mean so many things- for the album it can mean waiting to play at L.A Reidâ€™s office,â€ he joked.

â€œâ€Wait for Fateâ€- that song, I wrote when I was with my sister in New York,â€ he said. â€œSeeing so many people- I was thinking how we all go separate ways but then it just turned into a love song, about a guy in the whole crowd whoâ€™s still waiting for faith- meaning waiting for the right girl. I thought it was a cool title for the album.â€

With his first album in the states out of the way, JÃ³nsson is eager to continue his journey stateside.

â€œHopefully, this whole adventure will get even more exciting,â€ he said. â€œThe ball just started rolling.â€