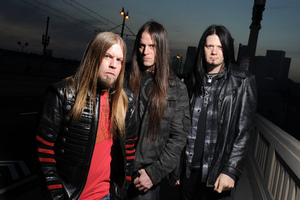 SOiL’s sixth studio album, WHOLE, will be released August 20 via Pavement Entertainment. Itâ€™s the bandâ€™s first 100% independent release. “We wanted to call all the shots on this album and, for the first time ever, hold our future in our own hands,” explains bassist Tim King.

WHOLE is the first album with original frontman Ryan McCombs since 2004’s RE.DE.FINE (after which he became Drowning Poolâ€™s lead singer). It sees SOiL returning to its classic sound that fans have come to admire, calling it the album “that could have come directly after the SCARS album in 2001.â€

Following the release of their first-ever live DVD in 2012, “Re-LIVE-ing The Scars,” SOiL began writing new material and entered the studio in February 2013 with producer Ulrich Wild (Pantera, Breaking Benjamin) to begin recording.

“This was by far the most comfortable and natural recording process we have ever experienced,” says guitarist Adam Zadel. “From the writing, pre-production, and through the main tracking and mixing, everything was smooth and fluid.”

Songs featured on WHOLE include “The Hate Song,â€ “Loaded Gun,â€ “Way Gone,â€ and “Shine On,” which is dedicated to the SOiL fans for standing by the band throughout the years. Another track, “Amalgamation,” sees McCombs taking song titles from both the SOiL and Drowning Pool releases he was a part of and weaving them into verses of the song.

â€œI think lyrically speaking, those that are familiar with the work I’ve done are going to get the next chapter that they would expect,â€ Ryan McCombs describes about the lyrical process. â€œWords from a heart and mind that has lived them. One of the greatest things I experience as a lyricist is when people come up and share with me how a song, or a specific verse or line from a song, got them through a hard time or times in their lives. It reminds me of the times music did that for me and how powerful music and/or a lyric can be in a person’s life.â€

Drums and percussion on WHOLE were performed by Will Hunt (Black Label Society, Evanescence, Device). “Will added a whole new dimension to the songs,” states bassist Tim King. “He added a monstrous and aggressive vibe to the album.â€ A guest guitar solo on â€œWake Up” was also performed by longtime friend, Mike Mushok of the band Staind.

In touring news, SOiL will hitting the road on June 19 for a show in Bowling Green, KY at The Rustic Room along with Pop Evil. The band is currently lining up shows for the entire summer, which will be announced in the coming weeks. One of the upcoming tour stops includes an appearance as part of the second annual Monster Energyâ€™s Aftershock Festival on September 15 in Sacramento, CA at Discovery Park, along with Avenged Sevenfold, Korn, Megadeth, Volbeat, A Day To Remember, HIM, Buckcherry, Halestorm, Asking Alexandria, All That Remains, Falling In Reverse, Device, Steel Panther, P.O.D., and many others.

Check out SOiL at any of the following stops: