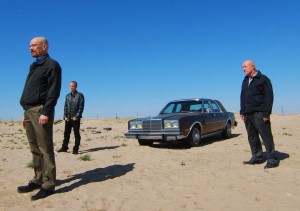 5. The Aftermath – The shootout ends with Gomez lying dead on the desert floor while blood spurts from the leg of a wounded Hank. Jack makes his way over to Hank and points a gun towards his head. Walt tries to intervene; he begs Jack not to pull the trigger and offers him $80 million to spare Hanks life. Walt tries to convince Hank to tell Jack that heâ€™ll abandon his investigation if he lets him live. Hank refuses and Jack pulls the trigger, killing Hank. Jackâ€™s men dig up Waltâ€™s fortune and take most of the money, only leaving him with one barrel with $11 million.

4. The Truth â€“ Marie startles Skyler by paying a visit to the carwash to deliver devastating news. Unaware of what occurred in the desert, Marie tells Skyler that itâ€™s all over and that Hank, with help from Jesse, finally has Walt in custody. Marie conveys that they are willing to help her if she gives them ever copy of the DVD they made framing Hank. She then forces her to tell Walt Jr. about Waltâ€™s secret life. Junior is devastated and in a state of disbelief. He stuns Skyler and says â€œIf all this is true and you knew about it, then you’re as bad as him.â€

3. The Prisoner â€“ After nearly being slaughtered by Jack in the desert after Walt disclosed his hiding place, Todd leads a battered and bound Jesse from a makeshift cage and into Jackâ€™s meth lab. Jesse, fearing that another beating is in store for him, pleads with Todd that he has told them everything he knows about Hankâ€™s investigation. Todd frees Jesse from the handcuffs then tethers him to the ceiling. Todd suits up, as Jesseâ€™s eyes fill with sadness when he notices photos of Andrea and Brock posted on a wall. Unconcerned with Jesseâ€™s observation, Todd reveals what Jesse is there for saying â€œletâ€™s cook.â€

2. The Brawl – Skyler and Junior are shocked to see Walt when they return home. Walt becomes frustrated as he ignores Skylerâ€™s bombardment of questions and his sonâ€™s demands for the truth. Walt refutes Skylerâ€™s accusation that he killed Hank and retorts â€œI tried to save him.â€ He insists that they pack and informs them that he has $11 million that can help them start a new life. Skyler attempts to take control of the situation by grabbing a knife and ordering Walt to leave. She slashes his hand as he approaches and the two start fighting over control of the knife. Walt gets the upper hand until Junior intervenes and wrestles Walt off of Skyler and calls 911. Walt grabs Holly and drives off as Skyler tries to chase after the vehicle.

1. The Monster Rears its Ugly Head â€“ Walt calls home and Skyler immediately asks â€œwhereâ€™s Holly?â€ Walt ignores her and tears into Skyler. He scolds her and blames her for everything insisting that she should have been obedient and listened to him. He then tells her that she had no right to tell Junior the truth, and raves that he built his empire all by himself. He devastates Marie by informing Skyler that they will never see Hank again. Walt abruptly ends the phone call, leaves Holly at a fire station, and then embarks on a new beginning with help from Saulâ€™s contact.