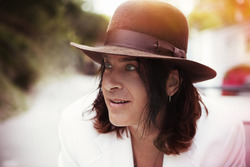 Review Fix chats with Jonny Kaplan about the title track of his new album, “Sparkle and Shine.” A gritty love song with some southern flare, it’s bound to get stuck in your head.