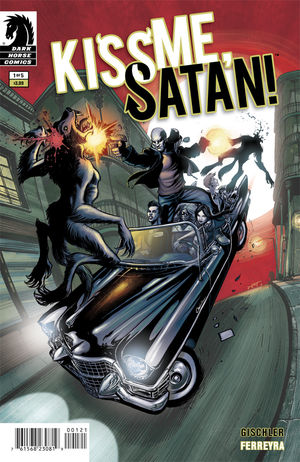 Werewolves are one of the runts of the horror liter. There arenâ€™t that many stories about them and when they do show up, they usually take the backseat to vampires and are doomed to be their mortal enemies. â€œKiss Me Satanâ€ by Victor Gischler with art by Juan Ferreyra is one of those odd werewolves stories and out there and itâ€™s one that breaks the rules while following others.

In a New Orleans that has a ton of werewolves, Barnabus, a local werewolf hunter, Â is being followed by the devilâ€™s henchmen. Meanwhile, the wife of a local werewolf pack leader named Cassian is expecting.

Too bad the kid doesnâ€™t have the Mark of the Lycanthrope which means major bad news for him.

The story is a welcome departure of the traditional werewolf story where itâ€™s basically some werewolf rampaging all over the place or someone turning into one and must find a cure while rampaging all over the place. On the other hand, itâ€™s the cop going against the corrupted kingpin story. To the relief of readers Gischler manages to give the story a modicum of emjoyability with a solid plot that knows what itâ€™s doing and has a solid flow to it.

The characters, even though we donâ€™t know much about them yet, are interesting. They may be the classic cop vs. mobster characters, but they do feel like genuine well rounded characters. With a little tweaking these characters could be some the best characters that defy their clichÃ©s.

Ferreyraâ€™s artwork gives the comic a look that screams New Orleans. It manages to combine the two things that define the city: An early French modernist look with the use of watercolor and the macabre. The art brings the comic to life and does give you the sense of being in New Orleans.

â€œKiss Me Satanâ€ takes a few tired ideas and makes a comic that is refreshing and an interesting read. Combine that with the art and this comic is worth taking with you while traveling down the bayou.