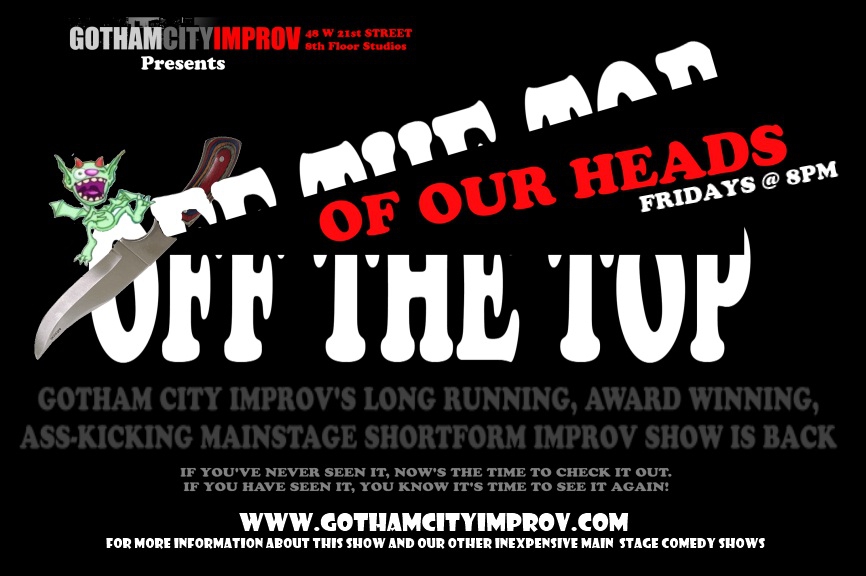 Every Friday night at 8 o’clock, the cozy, frog-green theater of Gotham City Improv fills their 60 seats with customers and friends that are in search of a few laughs. No need to wonder if your favorite seasonal ale is stocked behind the bar, it’s not. The theater has a BYOB policy, so feel free to tap back into your college partying days and bring your own beverage of choice.

â€œWe get a very friendly and happy audience. They like that they can drink their favorite product, even if its a non-alcoholic and the low cost is nice for folks who are looking to save a buckâ€ said, Artistic Director Marc Adam Smith

When the lights go out, the show begins and the cast members are left in the dark about what comes next. Smith opens the stage for Off The Top of Our Heads but leaves the audience in full control of his cast of comedians. With one word suggestions from the crowd pertaining to the topic of Smith’s choice, the actors are forced to leap from one idea to the next at his command.
Over the years, Smith has gotten an array of wacky suggestion from the crowd. He uses his expertise to determine which will bring in the most laughs.

â€œSometimes, someone will shout out something that they think is funny and will make their friends laugh but when it doesn’t, they regret it,â€ Smith said, â€œKeep it simple and smart.â€

To ensure maximum stage time for each member, Smith keeps it down to around six comedians per show, weekly. This keeps them challenged and on point with the performance.

Smith also makes sure to change up the set list from time to time, sorting through his â€œMental Rolodexâ€ of games and bringing them back into rotation once they have fallen off the map for a while.

â€œI like to keep the show fresh for the performers so it never gets into a rut.â€ Smith said.

Off the Top of Our Heads set themselves apart from the abundance of other New York City improv performances by practicing an older form of Improvisation that can be closely compared to the hit television show, Who’s Line Is It Anyway? This consists of quick improvs that get people involved in each scene and then quickly moves on to the next.

â€œWe have been doing this style that not a lot of people in NYC are doing anymore and we have really good, professional people that have been doing it for a while,â€ Smith said, â€œIt’s a good time.â€

Most of the performers of the Gotham City Improv team work 9-5 jobs to make ends meet, but prioritize being apart of the team.
â€œThe improv streets are not paved with gold,â€ Smith said.

Founded in 1987, Gotham City Improv not only puts on comedic shows weekly, they also offer courses in improvisation and comedy writing open to anyone with in interest in the field. A majority of the regular performers have taken the classes provided at Gotham as well as some well know names in showbiz, all of whom Smith welcomes back as guest performers.

Much like the rest of the cast of Off the Top of Our Heads, Smith started with a sample class offered at Gotham City Improv and was blown away by the experience back in October of 1992. He has stuck with it ever since.

â€œThe performances and comedians make you laugh and I don’t see anything wrong with that. I think that’s the bottom line for me.â€