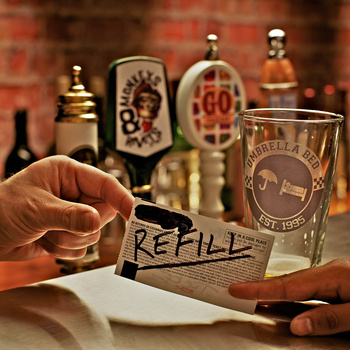 Review Fix chats with Umbrella Bed Drummer Mitch Thompson, who discusses the bandâ€™s new EP, â€œRefill,â€ as well as his influences and the bandâ€™s goals for the future. From Vampire Weekend to Stewart Copeland, the bandâ€™s musical likings are as diverse as their sound and with the extra musically eclectic Thomspon at the drum set, their sound is deeper than most ska groups.

Review Fix: What do you think separates the band from other Ska groups?

Mitch Thompson: We are alternative minded pop fueled by the roots of two-Â­tone ska. I think one thing we really do different is that we have never been a band that then â€œalso has a hornÂ­ section.” Our horn players function as an integral part of how our pop Â­songs get their story told. We arenâ€™t trying to awkwardly fit them into the arrangements, they are what propel our arrangements. We have a french horn on every song and although that may be an unique thing and maybe even a signature thing, the role and outcome is not any different than a guitar solo, a second guitar part or synthÂ­keyboard part. We love creating catchy little pop tunes and we go about it our own way. I think sometimes for the ska scene, we arenâ€™t â€œska enoughâ€ and I think thatâ€™s OK because that means we are trying to push things forward a bit. Review Fix: How does the band create their tunes? Thompson: I believe very strongly in the idea that the best songs just “fall out”. Guitar player plays a riff that was inspired by one thing, bass player is trying to put a punk spin on it, drummer is doing his best Stewart Copeland imitation, the singer was just listening to some Vampire Weekend, sax player is on some avant garde trip and you see where it all ends up. We then put it all through the blender and squeeze it into our 2Â­Tone frame work. The underlying inspiration is loving to make up songs, work them out and perform them in front of people.

Review Fix: Who are your influences?

Thompson: Personally, I grew up loving things that were heavily influenced by ska and two-Â­tone but it played out as an influencer not a defining element. The Police, the Clash, Elvis Costello Â­Â­ I am a drummer and I think Iâ€™ve stolen every single Stewart Copeland riff I can handle. I am a huge David Bowie fan and in some ways that is about as far away from ska as you can get, but thatâ€™s one thing me and the band love trying to do, infuse crazy and diverse influences into a common framework.

Review Fix: How do they differ from the other members of the band?

Thompson: A s a band we very influenced by the English Beat. I think that is the prototype for what we are and in a large way the most fitting example of what are sound is. We have actually played several shows opening up for Dave Wakelingâ€™s version of the Beat and we were such a natural fit, at least from our perspective. Certainly the 2Â­Tone sounds of the 1979 and 80 with its infusing of punk rock aesthetic and infectious upbeat sounds Â­Â­ even when the songâ€™s lyrical content was maybe serious or sad like with the Specials or the Selector. Right now we are mix of somewhat older folks and very young folks and it is just such an awesome thing to have a wide, wide range of influences, our newest and a younger member of the band Frankie Guerra is of Mexican heritage and grew up listening to Tejanos music at home and Pearl Jam with his friends. The horns players all are very influenced by the masters of classical music because that is how they were first exposed to playing their instruments. We all had a punk phase of some sort. The lead singer Hellrocket has a very diverse ear and will happily throw on a Lily Allen record or go mosh it out at a Helmet show. It is very big palette and makes an interesting stew. That’s what I like about using the Two-Â­Tone framework to be the anchor of how we put things together.

Review Fix: Two Tone Monster is a catchy track. How was it written?

Thompson: Our guitar player Kabel wrote the main riff and from there we just hash it out bit by bit. The lyrics and the music video for the song are sort of pointing out an interesting reality about being a band influenced by ska or more directly a ska band in the United States has been both a blessing and a curse. A lot of really great things happened from it and it is always nice to have a “scene” to fall back on but I think a lot times people hear the word ska and just make some vast determinations about what you are, what you sound like, etc and don’t really listen to your music. Ska’s flirtation with the mainstream in the late 1990s and early 2000 range sort of gave it a bad rap and a blanketed view of the genre. For us, ska is the framework that binds the whole thing together but in the US I think sometimes the moniker â€˜ska bandâ€™ is a noose that gets you dismissed from the getÂ­go because of a generalization of the niche that just isnâ€™t real. Sad, but true. We are proudly a ska band, but we simply write some good alternative/ indie pop songs first and foremost. That is really what Two Tone Monster is all about.

Review Fix: What are the band’s goals?

Thompson: â€œRefillâ€ is the first of a series of 3Â­EPs that will be released through Germany label MadButcher Records over the next two years. (I had the idea before the Pixies!) The EP decision, versus doing an album, is a reflection of the changing landscape of how new music is consumed. As our record label owner is quick to note. â€œNobody buys CDs anymore.â€ Umbrella Bed is focusing on smaller releases in combo of compact discs, downloads, more than likely some vinyl and then visually through the video medium. We hope to get the next thing out by the end of 2014. We want to stay active and this is the best way to go about it. We have the next EP already written. We can’t wait to share it.

Thompson: I am so excited about our new EP Refill Â­Â­ its like a rebirth and that sort of is the idea. We hadn’t put anything out in a while and here is your refill. The cover is an empty glass and you flip it over and its full. It is a short and sweet EP, get in and get out and full of energy. The first seven seconds is a curious conversation that ends with the line, â€œI thought they would be smart enough to know when to call it a day.â€, it’s an inside joke jolted away by a jarring guitar intro for the song â€œWish That It Would Stop.â€ It’s a statement signaling to ourselves and the rest of the world that we are just getting started. Reality of real life has always been a curious barrier for us. Weâ€™ve always been on the edge of pushing ourselves broader but we could go just so far. Often that could only be in our home base of Minneapolis/St. Paul, the Midwest of the United States and then ironically parts of Europe. We did brief tours in parts of Europe in 2005 and 2008 in support of previously releases. Because we couldnâ€™t hit the road for months on end, that has been all there has ever been time and resources for. But the democratization created by the internet, in just the time since we released our last album in 2008, has left us feeling like its time to take a stab at the larger world, not just the ska world, hearing what we are about. The EP on total is rooted in the 2Â­Tone ska tradition pioneered by the Specials, English Beat and sadness but not unlike those bands, I think this EP starts to create a sound with a much broader appeal outside of the niche that is ska.