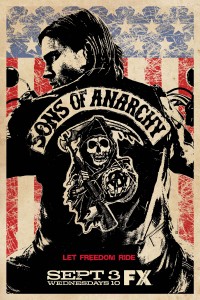 The battle between Gemma, Tara and Jax is on and with multiple plotlines beginning to rear their heads, the drama in “Sons of Anarchy” is at the tip of its iceberg.

Although “Los Fantasmas” was more a lukewarm episode, the intrigue and story possibilities are all there. Something huge will happen this season and soon. The fact that the Irish were barely mentioned and Clay was a no show this episode makes it clear they will play a role in the not too distant future.

The highlight of this episode was Nero’s release from prison, just hours after he was willing to sacrifice himself for the club. Jimmy Smits has been amazing on the show from his first appearance and this episode proved again how vital a role he plays on the show. To see him put his son’s welfare first and the club second and himself, finally third, proves Nero is a part of the MC, even if he doesn’t have a cut.

The same thing can be said for Katy Segal and Dayton Callie, who share one of the best-written moments of the show this season. After Gemma is released from jail, Unser (Callie) tells Gemma (Segal) that her current path will lead to her own self-destruction, but it’s not too late. Eager to save her relationship with her son, it’ll be interesting moving forward what lengths her character will go to. Always the firecracker, Gemma will absolutely provide the show with some memorable spots before the season is over.

But what about Tara and Wendy? Are they having second-thoughts about their wicked plan to tear Jax and the MC away from his children? Does Tara want to try and work things out with Jax? Her talk with Bobby and later on with Jax makes you think she’s not quite ready to leave Charming. This could have huge repercussions for the club and having Tara and Jax’s team, at this pivotal time is something the MC desperately needs.

That despair, fear of loss and ability to own up to your decisions looks to be a huge theme for the show the rest of the season. At this point, there’s no doubt it’ll be a satisfying ride, even if the adventure proves to hit speed bumps and traffic along the way.