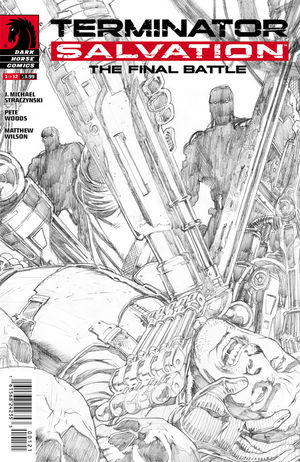 Another dystopian world where the fate of it depends on one man â€“ this much treaded storyline has so many steps imprinted on it that no one can distinguish the point. One sometimes questions when theyâ€™re entering their favorite comic book store and glancing at the shelves for a new journey to embark on, if yet another end-of-the-world saga is worth reading. Should they invest their time with these people? Is it necessary, better still is there anything left worth saying?

J. Michael Straczynski seems to believe so. He has brought to the pages a world the audience is well familiar with. â€œTerminator Salvation: The Final Battleâ€ is a new comic book series that deals with John Connor saving the world through the past, his present and the future. Yes, there is manipulation of time and all the key players are in place. But, this doesnâ€™t mean you know whatâ€™s going to happen next. During his stint on Thor he reinvigorated a long established character, who seemed dated and out of touch. With the new interpretation of this series expectations are high.

If you could go to a point in time that would change the destiny of the planet and give it hope, would you succeed? Would you survive? Worse yet, would you hinge your hopes on good intentions and a psychopathic killer to make this plan happen? It all seems that too many things have to converge for John Connorâ€™s scheme to work. Heâ€™s trying to stay one step ahead of Skynet â€“ tough to do when youâ€™re dealing with an artificial, yet sentient intelligence. It becomes increasingly difficult when other humans become involved and are working to bring to an end the very thing Connorâ€™s attempting to save.

Straczynski is once again asking the question â€“ is this race worth it? In this case heâ€™s not dealing with gods, heâ€™s looking into the inner workings of humanity. Always on the verge of extinction, many times at their own hands, the human race tends to sabotage itself. As humans and terminators are sent through the time stream, this story begins to simmer. Just who are the executioners and who the saviors are will be determined in the upcoming issues.

One thing is for certain, when you mess with the past in order to save the future , things are bound to go to a bad place. Thatâ€™s what makes this new series worthwhile. That and the artwork. Pete Woodsâ€™ art makes these timelines distinct, yet there is a thread of physical characteristics that unifies the comic book.

All in all the unknown can be a dangerous and dark place. Still, it’s a well written tale with twists will make you stop for awhile â€“ even if itâ€™s to immerse yourself in someone elseâ€™s dysfunction. And if anyone can make you enjoy reading that itâ€™s Straczynski.